Saakashvili wants to promote wine industry after end of term

Saakashvili wants to promote wine industry after end of term 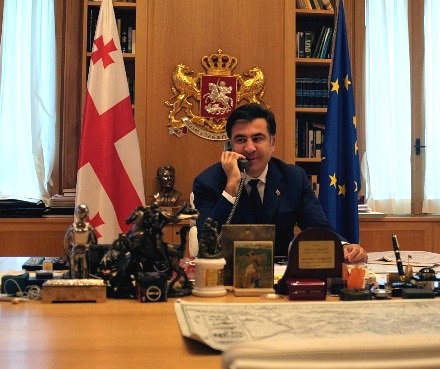 TBILISI, DFWatch–President Mikheil Saakashvili plans to open an education center for viticulture, wine-making and vine care in Georgia’s eastern Kakheti region, where he owns a house and vineyards.

Speaking in front of journalists at his palace in Tbilisi Wednesday, the president said this is a plan for what to do after he is finished serving his second presidential term.

He said work has already started to first establish the center in Kakheti, and eventually open the same type of center in Ateni Valley in the Kartli region.

“We are establishing wine associations everywhere because I think wine is a field where small land village industry can be beneficial, unlike many other fields of agriculture, where it needs invest of a lot of money,” he said. “But here it is possible with small costs to make our people have an income in the tourism that we already have.”

President Saakashvili also plans to set up another education center of political sciences in Tbilisi after he leaves office, because he believes that political education is ‘the weak spot’ of the country.

“I will do what I will be able to do in education, and in addition I will continue the popularization of our country,” he said.

“Everyone who thought that when we had a trip to Toba Varchkhili Lake it was just my caprice, it is not true. I did this because many foreign television channels reported it and many foreigners called me – how beautiful Georgia is.”

After the change of government in October 2012, the president has often complained that his duties have been reduced and that he doesn’t have anything to do anymore, except sitting in his office and feeling bored.

In an earlier interview this summer, Saakashvili said that he will only agree to meet with the government if has the opportunity ‘to implement large projects’. But he still plans to stay in politics, because of the large potential and because of his party’s ‘grand programs, which aren’t yet finished.’

“Now I sit in an office, and it is like deserved pension, because in fact I have nothing to do,” he said in an interview with a Ukrainian TV company. He also said that he doesn’t plan to leave the country after the end of his term.

In June, he told Georgian journalists that he doesn’t think much of what he will do after his term ends, but generally he plans to work with improving educational standards and raising political awareness.