Queue outside president’s palace to get criminal records cleared

Queue outside president’s palace to get criminal records cleared 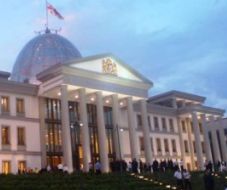 Ex-prisoners are queueing outside the presidential palace after Saakashvili promised to clear their records. (Interpressnews.)

TBILISI, DFWatch–Former prisoners and people on probation crowded outside President Mikheil Saakashvili’s palace in Tbilisi after he offered to pardon them and clear their criminal record.

The president said August 19 that people who are probationers or have been convicted will have their conviction removed for individual acts. He said he thinks probationers should be given a chance to start a new life.

The initiative will concern all probationers and people convicted, except those who were convicted of murder, mothers who killed infants, sexual violence, pedophilia, trafficking, torture, being involved with thieves-in-law or mafia, explosion or crime related to nuclear weapons, terrorism and crimes against society.

The president pointed to the mass amnesty introduced by the new government which he tried to block. He thinks it was ‘unjustified’ and that the law has created problems for society.

“I also say that we had more people in prisons than we had to have and we were working to reduce this number from time to time. This was correct, and our long term perspective to reduce the number through alternative sentence, probation and other measures,” he said.

People started crowding at the president’s palace the next day. Andro Barnovi, head of the president’s administration, said that Saakashvili wants to take ‘one strong and important step for development of society’ until his term ends.

“The only goal of this decision is that people who committed crime and served a sentence won’t have any more restrictions in the future, “ he explained.

On Wednesday, special camps were installed at the administration in order to deal with applications from probationers and convicts.

Barnovi said a large number who wants to have their conviction removed created a need for special camps. Fifteen people are served at a time in the camps and the registration is moving faster.