Wildfire has destroyed 100ha of forest in central Georgia

Wildfire has destroyed 100ha of forest in central Georgia 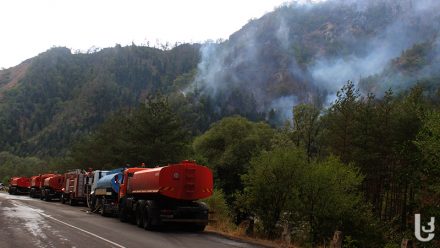 TBILISI, DFWatch–A wildland fire is still raging across a large nature park and key tourist destination in central Georgia, but authorities believe the main pockets will be contained by Friday unless their efforts are made difficult by strong wind.

“We currently don’t have new [areas that have caught fire]. We are going to localize the existing ones, which haven’t been extinguished so far,” Minister of Internal Giorgi Mgebrishvili told journalists.

The fire in Borjomi Gorge was almost contained on Wednesday, but a sudden increase in wind revived the fire in several places, Mgebrishvili said.

Zurab Alavidze, Minister of Regional Development and Infrastructure, said the chances of containment are good as firefighters have managed to cut off the affected areas.

According to authorities, the fire has devastated over 100 hectares of forest in Borjomi Gorge, an area comparable to one hundred football fields.

Up to 1,500 firefighters, forest rangers, police and volunteers are still working around the clock, aided by rescue workers from Armenia, Azerbaijan, Turkey and Belarus. The latter three countries provided much needed firefighter planes and helicopters. The most effective proved to be a Belarusian Mi-26; the world’s most powerful helicopter.

“The [Belarusian Mi-26] is so effective that everywhere it worked the fire has actually been liquidated,” Mgebrishvili said.

Georgian authorities turned down an offer from Russia to send one of the largest firefighting planes in the world, IL-76.

“Russia has expressed readiness to help […] We think that when we have a very difficult relationship with Russia, such a proposal is welcome,” PM Giorgi Kvirikashvili said on Thursday and expressed gratitude to all countries which are assisting Georgia in fighting the largest wildfire in a decade.