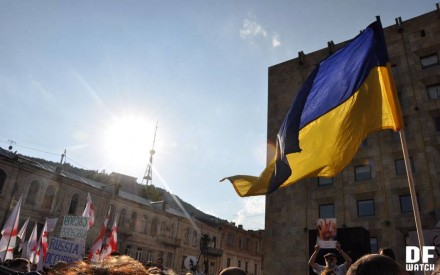 Tbilisi, DFWatch – Representatives of the civil society, science, and media lead the protest triggered by the latest developments at the border with South Ossetia and blame the government for inaction.

Around thousand people gathered in front of the State Chancellery in Tbilisi on 18 July to protest Russian occupation of Abkhazia and Samachablo (as South Ossetia is referred to in Georgian nationalist circles).

The protest was triggered by the recent tensions at the border with Georgia’s breakaway region of South Ossetia. Last week the border was pushed further into the Georgia-controlled territory by the Russian troops, effectively bringing parts of settlements, agricultural lands, and an underground portion of a BP-operated pipeline under South Ossetian control. The events are the latest development in the process of demarcating South Ossetia’s border by the Russian military, which is known in Georgia as ‘borderisation’.

Some protesters carried signs calling for the end of the Russian. One could also spot flags of Ukraine and NATO, which gives a hint how the issue of Georgia’s breakaway territories is often viewed as interconnected with the armed conflict in Ukraine and Georgia’s ambition to join NATO. Some protesters carried anti-governmental slogans calling to the end of the government’s ‘collaboration with the enemy’.

Prime Minister Irakli Garibashvili issued a statement where he recognised the democratic right of the protesters to express their views by means of a public gathering, although he warned them of ‘provocations’. At the same time, he blamed the previous government led by United National Movement and Mikheil Saakashvili for the current problems at the border with South Ossetia. 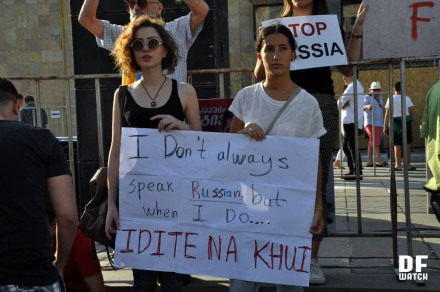 The speeches had a distinct anti-governmental feel with a lot of criticism for the way the issue of borderisation is handled directed against prime minister Irakli Garibashvili and minister for reconciliation (formerly minister for reintegration) Paata Zakareishvili. The government was also criticised for their overall policy regarding Russia, insufficient efforts at integration with the Euro-Atlantic structures, and ill-crafted economic policies.

‘Our government tells us that there are only two ways: war or bowing our heads to Russia. There’s also a third way: an everyday protest together with our international friends against Russia’s actions. Bowing our heads and cowardliness will only bring us to war’, said Guga Sulkhanishvili. ‘This government enjoys pro-Russian politicians, enjoys pro-Russian rhetoric, destroys the Georgian economy, imprisons its political opponents, and fights against state institutions. (…) You should remember that today Georgia has two enemies: Putin and this government.’

‘Tanks don’t need to enter Tbilisi in order to call the current situation a war. (…) Our country is in a state of creeping war. This war started not today, but 200 years ago. We should win this war’, said Tamar Chegoleishvili. ‘We should limit the collaborators’ access to power and the influence of the instruments of Russian soft power which disrupt our country by going against the law, equality, and freedom. Our government finances, with our money, the instruments of Russian soft power: [the newspaper and TV, successively] Asaval-Dasavali and Obiektivi — Putin’s allies. It promotes politicians sympathetic to Putin.’

‘Russia offers us peace in slavery, but our generation values freedom highly enough to never give up on it’, said Irakli Kiknavelidze.