What Georgia can expect from the Munich Security Conference

What Georgia can expect from the Munich Security Conference 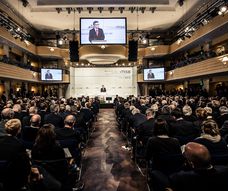 TBILISI, DFWatch–When the annual Munich Security Conference opens in a few days, it will be the first time Georgia’s delegation is headed by the prime minister and not the president.

The reason for the change is partly that a constitutional amendment came into force in the end of 2013 and gave the prime minister more authority while the president’s powers were reduced. These amendments were made in 2010 and were an initiative of former president Mikheil Saakashvili.

Despite the amendment, the president remains the first person in the country, but he doesn’t have the same influence as the president used to have.

Prime Minister Irakli Gharibashvili will chair the Georgian delegation at the Munich Security Conference 2014. The foreign affairs minister is also in the delegation. It is still unknown what issues Georgia will raise at this year’s conference.

Tornike Sharashidze, doctor in international relations, thinks the government will be careful now when it is attempting to improve relations with Russia. But he also thinks this doesn’t mean Georgia won’t talk about problems.

“I think there will be serious talks about Sochi Winter Olympics and this is an issue where the interest of Russia and Georgia may cross,” he told us.

Recently, there have been talks that Russia will try to strengthen its influence in Georgia during the time period until Georgia signs the Association Agreement with the EU, which is to likely happen in August, and try to interrupt the signing. The reason is that Russia doesn’t want Georgia to get close to EU and loose it like Ukraine.

Tornike Sharashidze thinks there is little time. The Olympics will end in March.

“No-one knows what will happen then and Russia may not be able to provide security at the Olympics or even fail conducting the Olympics,” he said, adding that it is also a question of how Russia will deal with Ukraine.

He says that if there is a threat it is inside Georgia.

“Those forces who claim that we do not need Europe have become stronger, and some confrontation may take place,” he continued, “but if the government wants to, this problem will easily be solved.”

Another issue is Georgia’s integration in NATO. Teona Akubardia, who works for the non-governmental organization Civil Council of Defense and Security, says it is important what support western countries will offer at the conference in Munich and how they evaluate the reforms in Georgia.

“This evaluation will have special importance now, because a few months are left until the NATO summit and there is a big expectation of getting a MAP (Membership Action Plan),” she told DF Watch.

If these countries say during the conference that Georgia is ready to get a MAP this will be great support for Georgia.

She thinks bilateral meetings which will be held within the frames of the conference of Georgian delegation members will also be important.

“Georgia’s participation in ISAF operations and Georgia’s reforms will obviously be reviewed,” she said, adding that she’s sure Georgia will use this tribune.

She also thinks ending the occupation will also be a topic and the issue of Russians moving the border.

“This is a very important forum, not only about international security issues, but also for issues significant for Georgia,” Akubardia continues, and says he hopes that after the conference it will be easier to judge in which direction current processes will go.