What can be done to improve integration of minorities?

What can be done to improve integration of minorities? 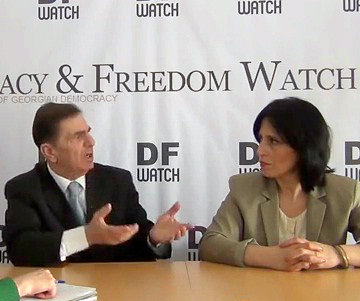 TBILISI, DFWatch–DFWatch organized a discussion about the problem minorities are experiencing with getting involved in politics and state affairs.

A representative of a minority diaspora and a spokesperson for an opposition party participated in our discussion.

Manana Nachkebia from the New Rightists Party and Van Baiburt, Deputy Head of Armenian Union of Georgia, discussed what obstacles there are for ethnic minorities to getting involved in political life.

Baiburt said that it is not a problem for ethnic minorities to participate in the local election, because in regions populated by ethnic minorities, the local government is staffed mainly by people from their own community, which means that they are engaged in state management.

But, he says, the problem is that ethnic minorities aren’t engaged in party activities and aren’t employed in the central government, and that is a problem which is caused by state policy.

Another problem is that minorities aren’t interested in this, he says.

Nachkebia is of a different opinion. She says it is an obligation of the state to make minorities more motivated, and nothing has been done to this end for years; on the contrary, the government has deliberately sabotaged this in order to easily get their votes and use them in elections.

Bainurt says that it is in the interest of the diaspora to support the government without political affiliation and they aren’t interested in getting involved in opposition party activities.

Both of them agree that the biggest problem with involving minorities is that they don’t know the official language (Georgian), but they have different views on how to solve this problem.

Nachkebia claims that the problem that teachers are lacking proper qualification, but another problem is that there has been no language programs for years, it only started in 2011; but in her opinion, this program has had no major results so far.

She adds that teaching a language is a long-term process – first of all, the government must do its best increase motivation among minorities for studying the language.

Baiburt thinks the government has an incorrect approach and shouldn’t avoid hurting larger diasporas making exceptions for them. He named examples from European countries, where he says there is no discussion whether minorities living there must know state language or not. He thinks that government policy must include the factor that people need and must study and in non-Georgian schools emphasis must be placed on studies in Georgian but not studying Georgian as one subject. There must be an environment at schools that better facilitate integration.