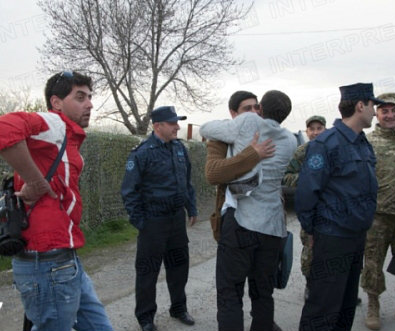 A Georgian TV crew of three was released by South Ossetia Wednesday evening, after being detained the day before. (Interpressnews.)

They were taken by Russian border guards to a detention facility in Tskhinvali, the administrative center of South Ossetia.

After being questioned, they were released and entered back across the border at Ergneti check point. There, they were greeted by Georgian law enforcerrs, staff of the EU Monitoring Mission and relatives.

The regional police department is now questioning them.

Zakaidze said before going in for questioning that they didn’t violate the border but Russian soldiers told them they had crossed it by ten meters.

Lekiashvili said he was asked whether he had served in the army and if he participated in the South Ossetia war in 2008.

Normally, detainees are fined in such cases, but South Ossetian KGB said the three were released without penalty as a sign of goodwill, according to the news agency RES.