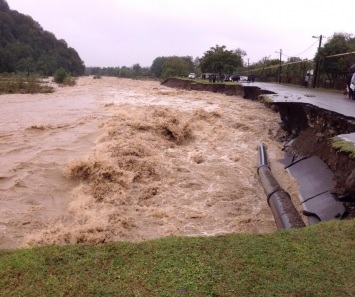 Unusually high water levels caused damage to roads, bridges and other infrastructure in the southwest of Georgia Wednesday. (Interpressnews.)

TBILISI, DFWatch–A storm of strength five hit western Georgia early in the morning on September 24 and caused damage to infrastructure, floods and landslides in the Adjara and Guria regions.

In Guria, a river flooded a school in Shemokmedi, students and staff were  evacuated by the emergency services. The villages Shemokmedi and Manakveti were left without electricity; the road to Tskhemliskhidi was flooded. In Chaiubani, four families were cut off from the central road when a swelling river destroyed a bridge.

Map based on data from local media showing the damage done by the natural disaster which has claimed at least one life so far. (Click to enlarge.) (Graphic by JumpStart Georgia.)

More than 4,000 households in Adjara and about 1,200 households in Guria were left without electricity. A representative of Energo Pro Georgia told journalists that electricity lines are being repaired and power is expected to be restored by the end of the day.

In lowlands, the heavy storm resulted in floods. Channel 1 reported that a 55 year old man drowned in Kobuleti.

In upper Adjara, the storm caused landslides. Twelve families had to be evacuated from Simoneti village, and roads were blocked in Agara, Machakhela and Tskhemlara.

Flooding caused by the rainstorm damaged a hydro power plant under construction in the village Adjaristskali, in Khelvachauri municipality.

Finance Minister Nodar Khaduri promised that the damage to infrastructure caused by the storm will be compensated. Also the Ministry of Regional Development and Infrastructure offered assistance.