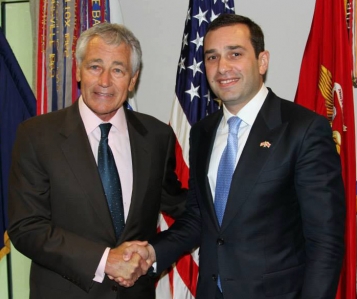 TBILISI, DFWatch–The Georgian government denies that it has offered the US to host a training facility for Syrian rebels fighting both the Assad government and the ISIS, against whom the US and some of its allies wage a military operation.

Foreign Policy wrote Tuesday that Georgia floated the offer during a recent visit to Tbilisi by US Secretary of Defense Chuck Hagel, but that the US has not yet decided whether to accept it.

On Tuesday, Georgia’s Council for Security and Crisis Management, which files under the office of Prime Minister Irakli Gharibashvili, issued a statement saying that “the information spread through media as if it is planned to train Syrian rebels within the current international anti-terrorist operation against Islamic State, is not true.”

The council also states that Georgia does not plan to send soldiers to the Middle East, but instead will focus on humanitarian missions.

“We declare that Georgia supports the effort of international community in fighting against terrorism and the confirmation of this is our participation in the ISAF mission in Afghanistan,” the statement says.

Foreign Policy published an article saying , relying on an ‘American administration official’ which said that Georgia, which had been very active in supporting US-led operations both in Iraq and Afghanistan, had offered the US to host a training facility for Syrian rebels, which would complement a training facility planned in Saudi-Arabia for the same purpose.

This is part of a strategy to strengthen those Syrian rebels that are fighting both against the forces of President Bashar Assad, and ISIS and its allies.

The Obama administration has so far been reluctant to cooperate with the Assad government, while acknowledging that ISIS as the biggest threat, and can therefore only rely on so-called moderate rebels in confronting ISIS inside Syria.

The Georgian Ministry of Defense also issued a statement in the wake of the Foreign Policy article, denying the deployment of Georgian troops in the war zone, but not mentioning the training facility at all.

“Different ways are under discussion to neutralize the terrorist threats endangering peace and security in the region and its democratic development.  None of the options discussed together with the allied countries envisage deployment of the Georgian army units in the war zone. A final decision will be reached at the highest political level,” the MoD statement says.

One of the sources in Foreign Policy’s article, Georgia’s ambassador to the US, Archil Gegeshidze, said in an interview with Georgian TV that he had been misquoted. A reporter for Georgian Public Broadcaster’s Channel 1 contacted Foreign Policy to ask whether this was the case, and received this answer from Yochi Dreazen, managing editor of Foreign Policy: “We stand behind the reporting and writing and have no plans to issue a correction.”