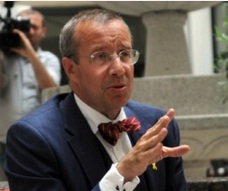 TBILISI, DFWatch–Georgia’s Western partners are threatening that prosecuting former President Saakashvili may jeopardize an EU treaty and membership in NATO.

Georgia has for years sought closer integration with the European Union and membership in NATO. In June, the EU is expected to sign the Association Agreement, and NATO is rumored to be planning a Georgia membership action plan (MAP) in September – eventually leading to full membership.

But now both “carrots” may be withheld by the country’s closest allies, after the top prosecutor asked former President Saakashvili to come home and be questioned about ten very serious criminal cases.

Saakashvili, who is currently abroad, must show up at the Prosecutor’s Office in Tbilisi on Thursday at 13:00 to comply, but has said he will not come.

Prime Minister Irakli Gharibashvili told newspaper Kviris Palitra that if Saakashvili fails to show up, he will be declared a wanted person internationally.

One of the US State Department top Georgia diplomats, Matthew Bryza, Sunday warned against pressing ahead with that procedure. Bryza told Georgian TV channel Rustavi 2 that ‘participants’ at a conference in Washington organized by the Marshall Fund ‘reacted’ to the summoning of Saakashvili and that it might ‘interrupt’ the possibility that NATO agrees to give Georgia a MAP at the Wales summit in September.

The former Deputy US Assistant Secretary of State, who was speaking from Brussels, further claimed that there is a problem of selective justice in Georgia that has not yet been resolved, thereby siding with Saakashvili’s party the National Movement in how to interpret recent events.

The governing Georgian Dream coalition considers the trials against former officials a business-as-usual process that aims at cleaning up documented crimes.

Speaking to Rustavi 2 TV, Ilves drew a parallel to the jailing of former Prime Minister Yulia Tymoshenko in Ukraine, and pointed out that it significantly stalled that country’s treaty negotiations with the EU.

From Sweden came a word of advice from Foreign Minister Carl Bildt, who commented on the news about the summoning of Saakashvili, also speaking to Rustavi 2. Bildt warned against ‘revenge politics’, which he said will ‘undermine Georgia’s credibility.’

Georgian prosecutors also received advice from the British ambassador to Georgia, Alexandra Hall Hall. Speaking at a charity marathon at Turtle Lake in Tbilisi organized by the embassy, she said, in any investigation, political motivation should be excluded, also when it involves the country’s former president.

“Due to events in Ukraine, this is a very sensitive period in the region. Georgia should demonstrate unity and ability to work with the opposition,” Mrs Hall Hall said, according to Interpressnews.

The ex-president himself in an interview blamed Russian President Vladimir Putin for his being called in for questioning in crimes that includes the suspicious death of his own prime minister in 2005.

“There is no doubt that this is done by him [Putin].”

Saakashvili suggested that the reason he is being asked about these criminal cases right now, is that he has been actively advocating for the opposition movement in Ukraine which succeeded in seizing power in a bloody coup last month.

“This is a direct response to Ukraine. This is a response to the fact that it seems Vladimir Putin is fed up with me in the recent period,” he said.

He added that it would be nonsense by Putin to think that he will give up peacefully.

“I plan to continue to fight for Georgia and to free the whole region,” Saakashvili said and declared that he will come to Georgia to free the country from those who are acting on orders from Putin.

“Nothing will stop me except if Putin kills me.”

Members of his party, the National Movement, are preparing demonstrations against the summoning of the ex-president.

The US Department of State also published a statement about the possible questioning of Saakashvili, expressing concern and asserting that ‘launching multiple simultaneous investigations involving a former President raises legitimate concerns about political retribution, particularly when legal and judicial institutions are still fragile’, then urging Georgia to ‘focus the nation’s energies on the future, a strong economy, continued reform of the justice sector, and rapid progress on Euro-Atlantic integration.’