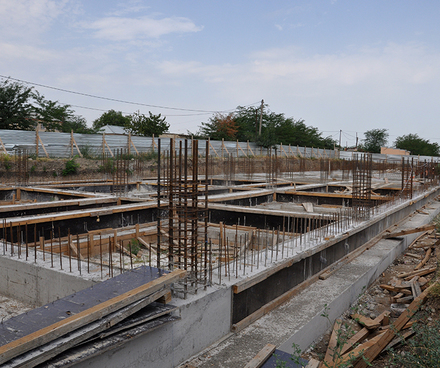 Only the foundation of the new school has been built so far. (DF Watch.)

TBILISI, DFWatch–For seven years, children in the small predominantly Azeri village Lambalo in Georgia have had to attend school classes in old barns.

In 2006, a group of experts announced that the old school in Lambalo had been sold and it was closed. The school was only dismantled in 2012, and construction of the new school started in January, 2014, despite a number of promises from both the current and previous government to construct a new school soon. 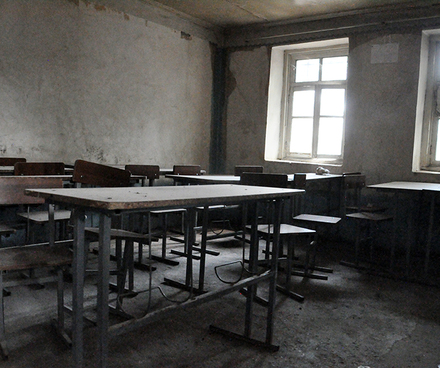 Classes were organized in barns and old bread houses, in which there are difficult conditions and some of the children prefer not to study and instead wait until the new school building is finished. 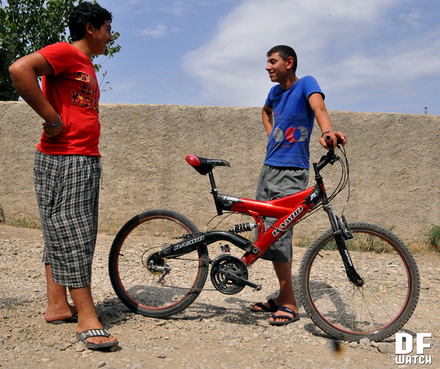 DF Watch visited one of the barns, which is rented in order to offer classes for about 400 pupils, who study in two shifts here.

Narkhanum, the woman who owns the barn, says she has rented it out for seven years. It is summer and school is over. Narkhanum has put wool all over the desks to dry. She shows us the classrooms.

In the yard there is one house, where she lives with her family, and two barns, which is used for classes for about 400 children.

Narkhanum says that next year children will still come here to study as the new school won’t be finished until 2015.

Workers who are building the new school told us that the construction work officially started in January 2014, but due to bad weather the work didn’t really get going until March.

So far only the foundation of the school is built. According to workers, this will be a three floor facility to accommodate about 1,000 pupils. The Education Ministry has given the order to a Turkish company, which employees Georgian workers for the construction work.

The workers say they will have to finish the building by September, 2015, in time for the start of a new school year. The new school is constructed in the same place as the old school once stood.

Babek, 16, is in eleventh grade. He barely understands enough Georgian to speak with us; however he says he is not dissatisfied with the teachers at his school. He goes to the Narkhanum barn for his classes.

Babek says in winter it is sometimes very cold even though they have a small wood heater at school. Sometimes the roof is leaking and the rooms are too small. He still enjoys going to school and doesn’t regret doing so, but has not yet decided what he wants to study at university. He says he will decide it after 12th grade.

Maxum, 14, wants to be a lawyer. He is in ninth grade studying with 25 classmates, while Hazi, who is also 14 year old, quit school last year and says he wants to continue studying when the new school is constructed.

In May 2013, President Giorgi Margvelashvili, who used to be education minister, visited Lambalo and promised the children there that they would start the new school year with a new building, but the promise wasn’t fulfilled.

In April, Public Defender Ucha Nanuashvili asked the education minister to take immediate measures to provide normal studying conditions for Azeri children in Lambalo and fulfill the duty of the government, which hasn’t been fulfilled for many years.

The ombudsman believes that the government is violating the Convention on the Rights of the Child and rights guaranteed by Georgian law about general education.

According to Davit Rostomashvili, the school director of Lambalo, more than 1,000 children from three neighboring villages are studyin in Lambalo. It was the Ministry of Education which rented barns from locals to locate children in there for classes.

In his report, the ombudsman writes that during classes there was a terrible smell as for years these places have used for cattle. During rain and lack of electricity there are no classes. The floor is made of concrete, the walls have cracks, while the rooms are not well isolated from each other. It is barely possible to heat the rooms in winter. There is unsanitary conditions in the toilets. Some of the barns aren’t supplied with water and there is no tap in the yard, so pupils bring drinking water from home.

The director of the school remembers former Education Minister Dimitry Shashkin from the previous government visiting Lambalo years ago and promising that the new school would be finished in 2012, but the construction didn’t even start.