Voter turnout at noon highest in Racha and Guria

Voter turnout at noon highest in Racha and Guria 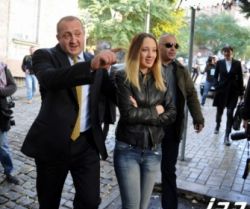 TBILISI, DFWatch–At noon, voter turnout in Georgia’s presidential election was highest in the Racha region (29%) in the mid north part of the country and in Guria (24%) in the south west.

Eka Azarashvili, spokesperson for the Central Election Commission (CEC), said they have received reports about irregularities. In Athens, there were the most number of voters who had been removed from the voters list and were unable to vote because they did not appear for registration in time.

There are 52 voting precincts abroad in today’s election.

Azarashvili said the election is proceeding in an overall peaceful fashion. But in Krtsanisi in the capital, unauthorized persons had to be removed from precinct number 5, while in the 12th precinct three persons showed identity cards that had faults and were denied to cast their vote.

Transparency International Georgia (TIG) reported that there are not enough ballot papers at many polling stations. It also noted that its observers had been denied access to precinct number 49 in Saburtalo, Tbilisi, and precinct number 26 in Telavi in the eastern Kakheti region.

The organization also points out problems with a ballot stamp in Bolnisi and a ballot box seal in Marneuli.

In Terjola, near Georgia’s second largest city Kutaisi, a commission member voted outside of the voting booth and demonstrably circled his preferred candidate. This may be seen as a form of campaigning at voting precincts, which is not allowed, according to TIG .