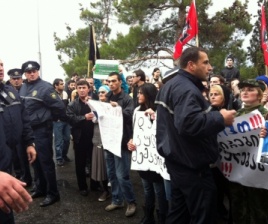 People from Khaishi on Wednesday blocked a road to prevent surveying work for the gigantic Khudoni hydro power dam. (Interpressnews.)

TBILISI, DFWatch–People from the Svaneti mountain village Khaishi Wednesday demonstrated against the construction of a gigantic hydro power dam that will wipe out their community.

Demonstrators blocked the road to Jvari-Mestia with stones to interrupt land surveying work and said they won’t allow the hydro power dam to be built.

Deputy Energy Minister Ilia Eloshvili earlier warned that anyone who interrupts work in Khaishi will be punished.

“The population will have the lands registered of which they were deprived. 1500 acres was taken. Lands will be registered and surveying work will start tomorrow,” he told journalists.

But the Khaishians met the construction workers with a rally. A reporter for Interpressnews says they demand that the workers leave. Police is on the spot.

The surveying work aims to measure the land that belongs to the locals, because they don’t have it registered in their names. The government wants people to register the land plots in their name, then the data will be sent to the state in order for the public register to approve them as legal owners. This process will last about four weeks.

The local population has been protesting for the last few months against the construction of the hydro power project Khudoni. They are supported by environment activists and organizations, who say the gigantic dam will cause environmental and social damage if it is built.