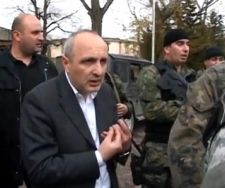 The video shows Interior Minister Vano Merabishvili instructing soldiers after a mutiny at a tank battalion base near Tbilisi in 2009. (Interpressnews.)

TBILISI, DFWatch–There may be added new charges against former Prime Minister and Interior Minister Vano Merabishvili, according to the head of parliament’s defense and security committee.

Wednesday, a 4-minute long video was posted on Youtube, showing preparations for a special military operation against the persons suspected of organizing the Mukhrovani mutiny in 2009.

Merabishvili’s words in the video has caused outrage in Georgia. He is heard ordering the military and the Interior Ministry special forces to hunt down the suspects. “I need two corpses… The reward is great,” he says in the Youtube clip. His choice of words is causing controversy in Georgia, because it is seen as a direct order to commit murder, and the scandal has forced the United National Movement on the defensive.

Data Akhalaia and Erekle Kodua, the leaders of two dreaded bodies within the Ministry of Internal Affairs, the Constitutional Security Department and Special Operations Department, respectively, can also be seen.

Then President Mikheil Saakashvili, former Justice Minister Zurab Adeishvili and Tbilisi Mayor Gigi Ugulava also appear, but not at the moment when Merabishvili issues orders to the military.

People dressed in military clothes discuss the action plan, when helicopters appear and Vano Merabishvili leaves with the soldiers.

“I need two men, I need two corpses. Bring me these two corpses and that’s it. The reward is great,” he tells people in uniforms and urges them to action.

The video was uploaded to Youtube by someone with the username Appolon Osman. Its authenticity has not yet been contested.

The Prosecutor’s Office said in a statement that they will investigate the case. President Giorgi Margvelashvili also said there needs to be an investigation.

The mutiny among officers at Mukhrovani tank batallion near Tbilisi took place on May 5, 2009. The government at the time said the mutiny was orchestrated by former military officials and planned in Russia, aimed at deposing Saakashvili’s government.

The mutiny was quelled the same day and most of the participants surrendered.

The head of Mukhrovani base, Mamuka Gorgiashvili, and several heads of military divisions were detained, along with several former generals. A few were wanted.

On May 20, two weeks after the mutiny, government special operation forces stopped three wanted persons on Tianeti highway as a result of which one former general, Gia Krialashvili, was shot dead, and two others, colonel Koba Otanadze and major Levan Amiridze, were wounded. The latter was head of Mukhrovani battalion staff.

Former government officials have not yet denied that the video is real. They only claim that Merabishvili didn’t violate any law by saying what he said.

Givi Targamadze, UNM member and chair of parliament’s defense and security committee in 2009, said that by the words “two corpses”, Vano Merabishvili probably meant General Krialashvili and colonel Otanadze, who were the organizers of the attempted coup.

“He [Merabishvili] says that it is necessary to detain two men and there he means that if criminals would resist, law enforcers would have reacted adequately,” Targamadze continued. “If it would have been a goal two kill the two, nothing would interrupt that.”

Targamadze also says that there is nothing to investigate about this footage.

Irakli Sesiashvili, who is now head of the parliamentary committee on defense and security, doesn’t exclude that the video posted on Youtube may lead to additional charges against Merabishvili.

He says that the footage shows Merabishvili ordering murder, while the duty of the interior minister is to save lives.

He said an investigation must be launched and define whether the video is authentic.

“People must be questioned and so forth. We are dealing with an order to murder – Merabishvili requests two corpses, orders murder, when the interior minister should save lives.”

Merabishvili on Thursday said in court that he really made such a statement and the video footage was made openly.

“I’m not ashamed that I made this statement,” he said, adding that according to his information, two Russian advisers participated in the Mukhrovani mutiny and the two of them were killed by the rebels in order to cover up the crime. Merabishvili said he was requesting the corpses of these two.

Merabishvili also said that one hour after this statement, 15 people were detained.

“And the fact that I didn’t wish to murder anyone is seen in that no-one opened fire at the detainees,” he said.