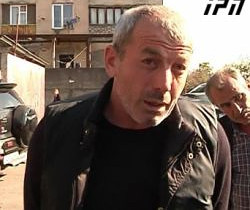 TBILISI, DFWatch–The body of a man who was shot dead at a military base in Tbilisi Sunday morning has been identified as 23-year-old Giga Shengelia.

Two other persons who were with Shengelia are being searched for, although their identity has not yet been established.

The Defense Ministry’s version is that the intruders were ‘dangerous and aggressive’ and that the response by the sentry at Krtsanisi training ground in southern Tbilisi – to shoot at them – was a lawful reaction.

Defense Minister Izoria said that the guard first verbally warned the three but that they didn’t obey. Then the guard shot in the air, but the intruders continued their attempt to enter the base. When it became too ‘aggressive and dangerous’, the guard ‘took measures’.

The defense minister said that investigation is continuing in order to find the other two intruders. They found a cell phone and a gun 100 meters away from the spot where the incident happened.

The victim’s family don’t trust the version which is being told by the military. They insist that their son didn’t have a gun and that he was unable to attack the guard. They think the intruders were actually trying to visit a friend at the base. Now the family demands an objective investigation and to have an alternative forensic examination.

Roman Shengelia, father of victim, says that his son never owned a gun and he was shot in back, which means that he didn’t attack but was running away. He asked why the head of the base had not simply raised the alarm, if strangers were attacking the base and were resisting. He also questioned why they discovered the body only several hours after the incident. He believes that his son bled to death an hour before he was discovered.

According to unconfirmed reports, the brother of the victim was also with him that night. Giorgi Shengelaia according to his friends served in the exercise center in Krtsanisi but father Roman Shengelia denied this.

The victim’s father demands that the footage from surveillance cameras is taken in as evidence.

The military police is investigating the shooting as death caused by negligence.