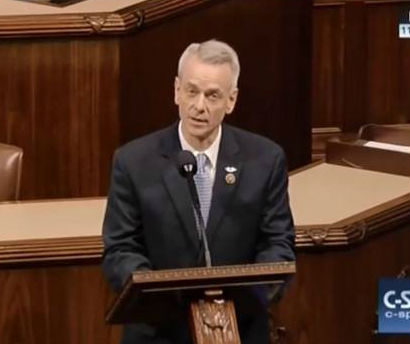 Tbilisi, DFWatch – Republican Steve Russell called for sanctions against representatives of the Georgian government for attempts at rigging the upcoming elections.

Steve Russell, 53, representative of Oklahoma, delivered a speech in the United States House of Representatives, in which he called the American government to impose sanctions on Georgian selected former and present government officials.

Mr Russell said that in the context of upcoming elections, Russia has been trying to ‘infiltrate the political process’ in order to establish a pro-Moscow government in Tbilisi. Mr Russell accused the former prime minister and ex-leader of the Georgian Dream, Bidzina Ivanishvili of being ‘chief among the funding efforts and political infiltration’, referring to him as an ‘oligarch’ and a ‘close ally of Vladimir Putin’.

Mr Russell also alleged that ‘according to one estimate’ 98 percent of Georgian electoral commissions have been bought out by Moscow and ‘their proxy’, Mr Ivanishvili, through a politically motivated privatisation process in an attempt at rigging the October parliamentary elections in Russia’s favour.

‘In October of this year, the republic of Georgia will hold elections. More than just an election to determine its national leadership, this election will likely determine whether the republic of Georgia remains a semi-free country that will continue on a path to self-determination, or whether it will succumb to corruption, Russian oligarch influence, and Russian domination.

Georgia has a long history of fighting to protect its identity against evil tyrants, bullying neighbours, corrupted officials, and outright invasion. A small but important nation with its distinct language and people, Georgian territory forms a vital land bridge between eastern Europe and west Asia, that is nestled on the Black Sea. With the exception of its neighbour, Armenia, much of her history has been fighting for survival against her neighbours, wanting to force her into Russian, Turkish, or Persian domination.

Since Georgia’s reassertion of independence from her Russian masters in 1991, her struggle has not been easy. Balance between a crumbling Soviet Union and internal unrest, Georgia emerged from several years of civil strife to defend her independence. Georgia saw her first president Zviad Gamsakhurdia ousted by Russian-backed leaders such as Eduard Shevardnadze. During attempts to restore elected government, the president Gamsakhurdia later would lose his life in still mysterious circumstances.

After a period of domination by Russian-backed forces and political leaders, the republic of Georgia strives for great reforms — strove for great reforms in the Rose Revolution of 2003, finally breaking her chains and setting a path toward self-determination. The United States and the international community embraced this effort and global monitors affirmed the legitimate vote of the people that exposed the corruption of the election results.

Shevardnadze’s government attempted to ignore the true results, but the Georgian people had a different plan and peacefully forced Shevardnadze to succumb to the will of the people as they stormed the parliament with roses. It was one of the most inspirational episodes of freedom in world history.

Since then, Georgia has enjoyed a period of self-determination, western engagement, human rights improvements and trade. This has not been without cost. Separatists in the Georgian districts of Ossetia and Abkhazia, encouraged by Moscow, cast the republic of Georgia into turmoil. Russia used this as pretext to inveighed Georgia and still occupies this territories, while denouncing earlier agreements to close Russian bases on Georgia’s Black Sea coast.

Still, president Mikhail Saakashvili was able to take his rightful place duly as the elected president of Georgia and his reforms brought Georgia from a backward status in the world to a much improved financial structure with marked increases and economic growth and foreign investment.

For all Georgia’s struggles, for all her self-determination, outside neighbours once again are vying to make Georgia subservient to their wishes. Russia has been stung by free peoples and independent states that she once dominated in the Soviet era that now choose instead to preserve their language, culture and history and restore their freedom.

Russia, for its part, has done everything in its power to force these peoples back to serf status, whether in Crimea, Ukraine, the Baltic states, or Georgia, the pattern has been the same. Russia’s playbook starts with flooding opposition groups with cash from oligarchs loyal to Moscow, separatists are courted in areas with some Russian ethnicity and then encouraged to foment division against the struggling republics, demanding their rights for Russian peoples in these territories.

Russia then aids militias to create violence that strings the local, political, and law enforcement structure, causing the people living there to wish for anything, even the bad old days to somehow restore order.

Then, national political parties are infiltrated and flushed with oligarch cash and promises of power as they convert legitimate parliament into calls for pro-Moscow governance that in essence becomes nothing more than the old soviet socialist structure ruled by Moscow.

In Georgia, it has been no different. Despite Georgia casting off outside invaders and attempting to push off the chains of Georgia in the early 1800’s or in 1918 or in 1991, Russia somehow feels it is her right to treat Georgians as a subclass of human beings that only exist to serve interest of Moscow and her territories should merely be a transit way for Russian interest.

After the successful removal of Russian chains in the rose revolution in 2003, Russia has continued to bully Georgia’s political system, fomented unrest in Abkhazia and South Ossetia, invaded Georgia and violated her agreement to withdraw from bases in Georgian territory. Amazingly, through all of this, Georgia has remained resolute. So in classic form, Russia has moved to infiltrate the political process in the hopes of creating its own pro-Moscow government in the Georgian capital to hand them everything on a silver political platter.

Combined with the full privatisation of the election commissions who one source estimates is 98% controlled by Ivanishvili, the Georgian people face an alarming prospect in their right to free elections in October of this year. Faced with such bullying, the Georgian people are looking to the world for support.

It is somehow fitting, M. Speaker, that this Saturday marks St Georgia day in world history. St George, the Christian martyr and mythical slayer of dragons is the namesake for whom country of Georgia takes its name, according to some legends. The Georgian people are willing to sleigh this political dragon and stand for their freedom as they have before but they need our help.

We can’t ignore their pleas. After all, most Americans don’t even know where Georgia is on the map or we can give them a megaphone to shout their message. And the message is this — they wish to remain free.

Here are some simple steps that we in this country can take.

We call on the President of the United States to assist in monitoring of this fall’s election processes in Georgia as we once assisted them in the pivotal 2003 elections.

We call on the Georgian electoral commissions to be restored to representative membership, to counter the private buyout being conducted by Moscow and their proxy, oligarch Bidzina Ivanishvili.

We call upon the United States Department of Treasury and western banks to freeze the assets of Ivanishvili for violations as an illegal arms trader.

We call upon the State Department to flag Georgian officials and business leaders who discovered to be complicit in tampering with free elections to have their visas revoked and their assets frozen.

We also call upon western journalists in our free press to give the Georgian people a chance to have their story heard by investigating and covering the remaining few months of what could be the last free months of a Georgian republic.

Finally, we call upon the self-determined free and resolute people of Georgia to stand in the spirit of St George. Hold your head high, grasp the lance and pierce the attacking dragon. You have been threatened before.