Urges UNESCO to Abkhazia to save 10th century fresco

Urges UNESCO to Abkhazia to save 10th century fresco 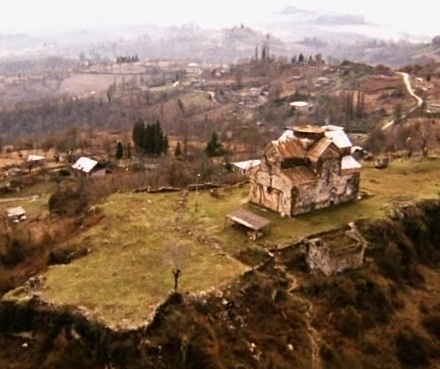 Inside this monastery in Abkhazia is the world's only fresco of king Bagrat III, first king of a united Georgia. Georgian authorities believe the painting has been destroyed during restoration works.

TBILISI, DFWatch – Georgia is ready to make an exception from the travel restrictions and let a UNESCO mission enter Abkhazia in order to save a historical monument.

However, the authorities in Abkhazia are not willing to let a UNESCO team enter from Georgia.

What is at stake is Bedia Monastery, built by the first king of a united Georgia, Bagrat III Bagration at the end of the tenth century, in 999.

This complex was one of the cultural centers of Georgia for centuries and had its own library. Even more important, it has the only existing fresco of the first king of a united Georgia.

Georgia in 2008 expressed concern about the possibility that the monument could be destroyed, when there was information that Russia was going to conduct restoration works on historical monuments in Abkhazia.

Video footage was broadcasted by the Abkhazian TV channel Абаза showing that the walls and frescos of the monastery were already painted, including the Bagrat III fresco.

In that report, de facto Prime Minister of Abkhazia Sergey Shamba said: “Our goal is to restore this monastery and this is not simple work, but our duty. I want to thank all the people, who protected this monastery from the ‘barbarians’ [Georgians].”

Georgia immediately made a statement that incorrect restoration would destroy the unique face, unique ornaments and still preserved frescos on the walls, and demanded that the Vienna Convention was followed, according to which, historical and cultural monuments on occupied territories are inviolable. Georgians demanded to involve Georgian experts in the restoration process, but this request wasn’t followed.

It is now being said by the Georgian National Agency for the Protection of Cultural Heritage that the fresco has been destroyed. The only fresco of Bagrat III collapsed due to mistakes made during restoration works, according to Giorgi Gagoshidze, spokesperson for the agency. He says they were reinforcing the walls of the church when the Bagrat III fresco was destroyed.

The Georgian government thinks the international community should be informed about this problem and get involved. Abkhazia lies in the northwest corner of Georgia and is currently occupied by Russia. Georgian jurisdiction therefore does not apply.

Nino Kalandadze, Deputy Foreign Minister, suggests as an interim solution that UNESCO sends a mission into Abkhazia to describe the situation. But according to Kalandadze, UNESCO is unable to send a mission yet, because there are no safety guarantees. But there are new indications that a solution might be close, after the Abkhazian de facto Prime Minister Leonid Lakerbaia said he is ready to receive a UNESCO mission, but not from Georgia-controlled territory.

Nino Kalandadze says that the cultural heritage issues are so severe and painful that the Georgian government is ready to discuss other ways to make it possible for the mission to go there, and therefore Georgia is ready to make an exception from the travel restrictions.