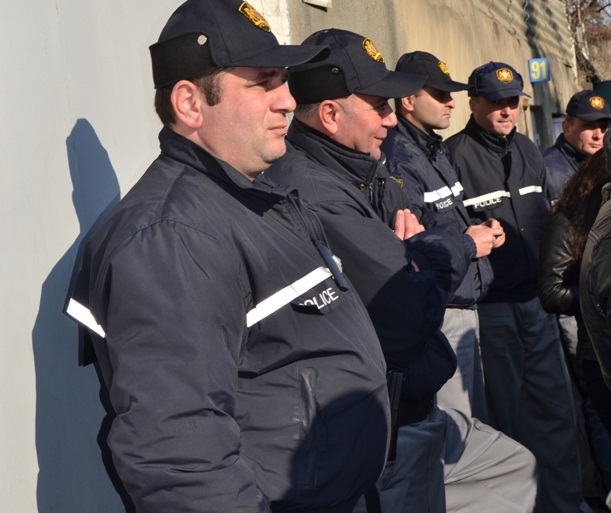 Police blocking journalist from entering Maestro TV's studio building December 1. Maestro's former producer, Mamuka Glonti, asked other media to join a new organization for common defense under the slogan 'one for all, all for one'.

TBILISI, DFWatch – Independent Georgian media units Friday signed a memorandum of mutual defense, vowing that any harassment on any of its member will lead to coordinated action by all the others.

It comes after a crisis at the small independent TV station Maestro, which is still broadcasting under emergency conditions; the result of a complicated dispute which some claim is being orchestrated by the government.

The former producer of Maestro called for solidarity and proposed forming a common platform for defense against future attacks. A draft memorandum was worked out, and Friday finally signed.

There still is time for other media to join in, as the final agreement will be signed on February 1 and is open for late-comers until then.

The main idea is to establish a strategy for media outlets to protect against illegal actions by the government under complex and unpredictable conditions.

In case of illegal actions by the government, harassment or attack on any of the member media units, all the signatory organizations will share the responsibility to act together inside the country as well as on the international arena.

Lasha Tughushi, editor in chief of the newspaper Rezonansi, thinks the main impact of this new unit is if it proves able to mount a real defense in the future.

“If we do not protect ourselves, why should the others? Accordingly, different media units agreed on certain principles. I think that this is a normal process, when the media has common defense interests. Moreover, in the environment in which we currently are, for effective action by this organization, media themselves will pay the money for membership fee. This is not about serious financing, of course,” Tughushi says.

For the media unit’s founders it doesn’t make sense whether a specific media unit is good or not, or if anyone is critical towards it. It is important to be organized to combat illegality. They agree to perceive an attack on one as an attack on all the others. This applies to media units which are members, but a non-members may also be defended on a case by case basis.

The final signing on the memorandum will be held at 13:00 on February 1, 2012 in the big hall of Obiektivi. If a media organization wants to join after February 1, it only will have the right to join by a consensus among all members. A media unit may be excluded by a majority vote.

After signing the memorandum the new organization will be formally registered and rules and organizational structure worked out.