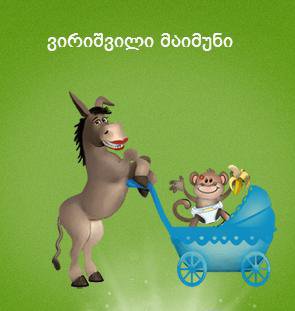 One of several popular Instagram cartoons poking fun at Mayor Davit Narmania. The title says “Son of a donkey, a monkey”

“Today we officially start procedure of no-confidence in the City Council against the mayor of Tbilisi. We call on the majority [Georgian Dream, ed.] whose signature is required for this procedure, to take responsibility for the activities of the mayor of Tbilisi,” UNM’s Irakli Abesadze said.

The UNM needs 24 signatures out of 47 City Council members and in order to succeed 34 votes are needed, which is barely feasible as Georgian Dream faction numbers 16, plus some other factions close to the GD.

The tensions ran high after a construction company cut down trees in a small park on Kazbegi Avenue to build two multi-storey residential buildings. Many Tbilisians have had it with this kind of moves by the city’s mayor, and this was the last straw.

Cutting down healthy trees requires a special permit from Tbilisi City Hall, which the company had. City Hall insists that the trees were sick. Environmental activists doubt this, as it has been common to bypass the law by labeling healthy trees as sick.

A bitter squabble happened at a meeting between Mayor Davit Narmania and environmental activists at City Hall on Wednesday, culminated with Narmania calling an activist, a young man, “You, Monkey, Son of Donkey”. This remark, a standard Georgian mild swear, has been immediately spread across media, triggering series of scathing mockery against Narmania.

At the same time a protest continues at the entrance of the City Hall demanding resignation ecology and greening department and her deputy and restructuring of the department itself.