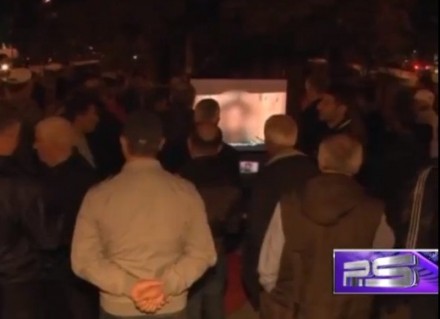 Public screening of the rape video in Zugdidi (Rustavi 2)

Tbilisi, DFWatch – United National Movement’s several regional offices were attacked in Georgia on Monday, in the wake of publication of disgusting video depicting rape of a detainee allegedly during the previous government.

Small crowds of 30 to 100 protested at Kutaisi, Batumi, Gori, and Ozurgeti offices demanding to ban the UNM. In several occasions a violent squabble happened between the protesters and UNM members. In Kutaisi protesters broke into the office but police managed to drive them out.

No injuries reported so far. The police detained a man in Kutaisi, who was soon released after being fined by 50 laris ($21).

The UNM, former ruling party and currently the main opposition power, claims the protests have been masterminded by the authorities, as many members of the local authorities and local offices of the ruling Georgian Dream were present during the rallies.

“These groups have been mobilized by the authorities, which try to mitigate outrage for its attempts to seize Rustavi 2 (TV),” Nugzar Tsiklauri, MP, said to journalists.

On Sunday, the disgusting video was shown publicly in Zugdidi and Tbilisi, thus adding fuel to the fire, as many civic organizations, as well as Ombudsman’s office, raised concern over such a conduct.

“It’s a shame what happened in Zugdidi,” Ombudsman Ucha Nanuashvili said. “All of those should be punished who committed torture, who ordered it and (also those) who made that video public.”

In 2013 Interior Ministry discovered underground cache in Samegrelo, Georgia’s western province, containing thousands of video footages depicting intimate personal life of people, as well as torture, physical, verbal and sexual abuse of detainees or prisoners. Videos reflecting personal details were destroyed, though other footage were preserved for the investigation purposes.

Allegedly those videos were filmed during the rule of Mikheil Saakashvili by the Ministry of Interior.  The footage published on Saturday was from the same cache.

The government denied its implication with the publication, indicating that some videos  might have been copied by the members of the previous government; the Prosecutor Office has launched an investigation into the case.

As Giorgi Badashvili, Chief Prosecutor, said he would personally oversee the investigation.

“There are many ways how this footage might end up in Ukrainian media. Investigation is in progress,” Badashvili said on Monday.

Back in 2012, couple of weeks before the parliamentary election, videos of torture, including sexual abuse of inmates, at prisons leaked to the media, devastating popular support for Mikheil Saakashvili’s UNM, then a ruling party, and perpetuating sweeping victory of the Georgian Dream.

Some commentators argue behind the release of the video on Saturday was the government’s desire to mitigate effects of growing discontent with its policies by invoking outrage on the heads of their political opponents.

Publication of the video coincided with the recent release of NDI survey results showing dramatic drop in GD popular support.