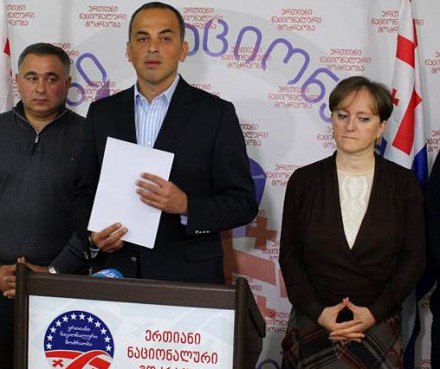 Levan Varshalomidze apologized to voters for not being able to protect their votes. (Facebook.)

TBILISI, DFWatch–A politician for the UNM party in Adjara has refused to serve in the region’s supreme council, echoing a recent decision by Sandra Roelofs, the former first lady, to not take her seat in parliament.

Levan Varshalomidze, former chairman of the Adjara government, recently returned from Ukraine to take part in the country’s parliamentary elections. But the UNM’s top candidate announced at a special briefing on Thursday that he apologized to voters but can’t meet their expectations and protect their votes.

“I accept the decision not to enter the Supreme Council, either as leader or as an MP. This will allow me to pay more attention to the people and continue more intense work with my team. This decision does not mean that I am leaving politics. Moreover, I will concentrate all my efforts towards changes. I [will] stay in Georgia, in my homeland, and continue to meet more people [and] arrange more personal meeting with them,” Varshalomidze said.

Varshalomidze will be replaced by fellow UNM member Asmat Diasamidze in the new Supreme Council. In the regional legislative body, composed of 21 deputies, UNM will have 5 mandates and one faction, headed by Elguja Bagrationi.

This move by Varshalomidze clearly echoes the infighting inside the UNM over how to handle its sound defeat in the October elections. One faction within the UNM is demanding a tougher stance against alleged election rigging and call for boycotting the new parliament, while others espouse a less radical position and are ready for conventional political struggle in the parliament. The former is either led or, at least, inspired, by former president Mikheil Saakashvili, while the latter is believed to be led by Giga Bokeria, the party’s foreign affairs secretary.

Both factions are preparing for a final showdown at the party congress planned in December, where the former ruling party will elect its new leadership.

Varshalomidze is a personal friend of Saakashvili and his closest ally. They befriended and spent their student years together in early 1990s in Kiev, where he studied at Kiev State University, while Saakashvili studied at Taras Shevchenko National University.