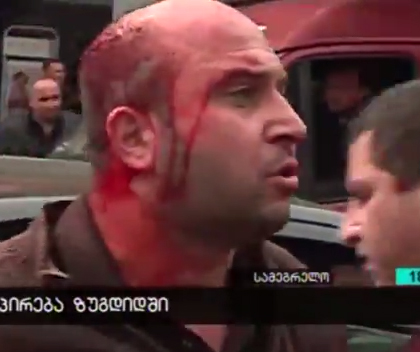 TBILISI, DFWatch–Supporters of Mikheil Saakashvili’s National Movement (UNM) and the ruling Georgian Dream coalition clashed in Zugdidi, western Georgia, resulted in injuries and bitter mutual accusations less than a week before the former plans to hold a large rally in Tbilisi demanding resignation of the government.

A clash erupted in Zugdidi, a central city of historical province of Samegrelo and once a stronghold of the UNM, after the GD activists approached the UNM headquarters and office of Tavisupali Zona (Free Zone), a youth movement affiliated to the former ruling party.

Some people from both sides were brandishing large wooden sticks. A clash erupted first at the Zona office when the protesters tried to break in the office. Clashes happened at the UNM office as well.

Eventually the police managed to disengage the sides. The exact number of people injured is still unclear,  but is not less half dozen from both sides.

The GD activists argue that they planned a peaceful rally but had been encountered the UNM men with clubs, while the UNM states that the assault on their offices had been prearranged by the ruling party in order to intimidate and dissuade their supporters from taking part in the March 21 rally. They pointed out that several members of the local Sakrebulo and Gamgeoba participated in the confrontation.

On Sunday evening Georgian Dream – Democratic Georgia, the largest member of the ruling coalition,  issued a statement expressing concern about events in Zugdidi calling for law enforcers to investigate the case and punish those responsible. The coalition also called for members and supporters not to ‘fall for provocations’ arranged by the UNM which aims at ‘bringing artificial tension.’