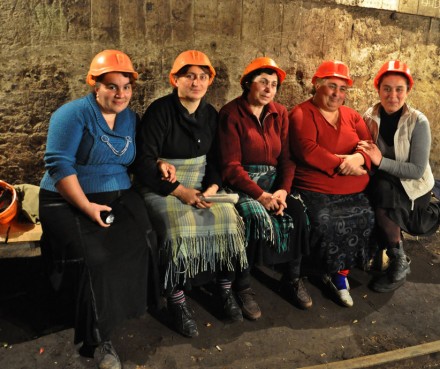 Tbilisi, DFWatch – In Georgia, a woman make less than ⅔ of a man’s salary due to segregation in labor market and prevailing traditional gender roles.

Washington-based Institute for Women’s Policy Research (IWPR) estimates that the worldwide gender wage gap, at its current slow change pace, will close only by 2058. In 2013, an average woman in the world made 78 percent of an average man salary.

In the Caucasus, the gender pay gap is even wider. In Georgia, according to data from the National Statistics office, a woman on average makes 63 percent of a man’s salary. In Azerbaijan women make 47.5 percent of men’s salary, in Armenia 64 percent.

In June 2014, a group researchers from the Center for Social Sciences (CSS) at TSU, conducted a research on gender discrimination in Georgia’s labor market. They interviewed 1364 formally or informally employed individuals from various parts of the country.

As CSS research showed, an average woman’s salary here varies from 251-400 Georgian laris, whereas an average man’s salary is between 401-700 laris. The data showed that both genders have more or less equal promotion and pay rise opportunities, but women are less likely to get bonuses than men (66 percent vs. 34 percent).

Only 53 percent of women and 42 percent of men agreed that different pay for peers occupying the same position and having the same responsibilities is discriminatory. As the researchers stated, “if this [equal opportunity] principle is not regarded a basic right for everyone, it is difficult to struggle with the gender pay gap and overall inequality in the labour market.”

The data also demonstrates that the level of education, except for PhD degree, does not affect man’s salary. Meanwhile, a woman must to have at least an undergraduate degree to match a salary of a man with a secondary education. As the research leader Nani Bendeliani explained DFWatch, this can be at least partially explained by gender segregation in labor market. As it can be seen in the graph below (based on CSS data), there is a clear cut between men and women dominated sectors in the labor market. 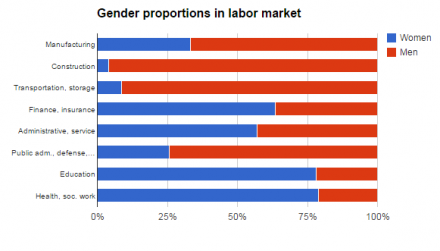 Sectors dominated by women are education, public health and social work, service and administration, finances and insurance. Bendeliani stressed out, that even if more women tend to work in a finance sector, they are working in low-level positions, such as bank operators, and men occupy managerial positions. Meanwhile, men dominate in transport, construction and defence sectors.

Thus, according to Bendeliani, as women tend to dominate sectors where higher education is a must, such as education or finances, they need a diploma to start their career. And more men work, for example, in a transport sector, where diploma is not needed for an entry level position.

However, even when diploma is needed in ‘feminine’ jobs, these mostly public sector jobs are atill less paid than ‘masculine’ private sector positions.

Job interviews can be discriminatory

44 percent of Georgians use their family, friends and acquaintances to find a job. And almost 2/3  of those, who rely on their social network in job search, get employed. Such informal job market also affects gender segregation According to the researchers, “as women have more contacts among women and men with men, the recommendation-based recruitment strengthens segregation”.

As a lot of Georgians tend to look for a job using informal ways, it is not surprising that job interviews are not common in Georgia, as only half of the respondents had had participated in one. But if someone is to be interviewed for a job, it is highly possible that they will be asked personal questions not related to their career. Over 65 percent of all research respondents, men and women, were asked about their marital status, and 40 percent were asked about the number of children.

Such questions can also lead to a discriminatory treatment, because, as Bendeliani explained, having a family can be seen as an advantage for a man and as a disadvantage for a woman. A man is perceived as a provider for a family, and for a woman a family can be seen as an obstacle for her career, because she is expected to put family first and thus have less time for her duties at work.

Prevalent perceptions of gender roles can help explain the existing pay gap in Georgia. In 2013 UNDP published a research on gender equality in Georgia. This study showed that Georgians still see a woman as the one who raises children and takes care of the household, and a man’s main role is to provide financial support for the family. The research revealed that actually 30 percent of women are breadwinners in their families, but such situation is not considered ideal.

According to the UNDP data, the general public thinks that there are certain positions, suitable for women: a teacher, a doctor, a pharmacist, a journalist, a bank operator, an artist, a position in an NGO, an owner of a small business, a position in a service sector. In general, career and breadwinning is perceived as a man domain and a woman is supposed to realize herself in her family.