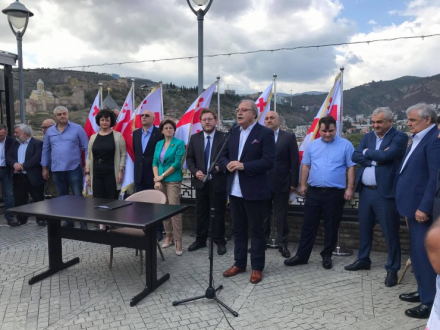 State for the People, Republican Party, Chven Tviton, and Progress and Freedom joined ranks with UNM to defeat “oligarch Bidzina Ivanishvili” and signed a formal agreement on Tuesday.

State of the People is a political coalition founded by Georgian operatic bass Paata Burchuladze in 2016 and was perceived as a counterweight to both UNM and Bidzina Ivanishvili’s Georgian Dream. However, in 2016 general elections it received only 3.45 percent, after with Burchuladze and several popular figures left the party.

Republican Party was established back in 1978 by a handful of Soviet dissidents. It was part of coalition led by GD, which beat Saakashvili and his UNM in 2012. After few years, however, they parted with GD and since then harshly criticize Bidzina Ivanishvili and government.

Progress and Freedom has recently been established by two businessmen, Kakhaber Okriashvili and Cezar Chocheli. Former is majoritatian MP who until recently was part of Georgian Dream coalition in the parliament. HE owns large pharmaceutical company PSP. Cezar Chocheli owns several businesses in Shida Kartli, including a brewery and was regarded as being favored by Saakashvili in exchange of political allegiance. He then, in 2008, was appointed as a governor of Mtskheta-Mtianeti region but had to step down after UNM lost elections in 2012.

Chven Tviton, which literally means “we ourselves” is a tiny political party led by Paata Davitaia, former PM, and mainly focuses on issues of occupied territories.

“The Republicans have decided to unite in the electoral bloc, because this is the force that worries Bidzina Ivanishvili the most. Let’s unite to end Ivanishvili’s swamp,” Republican Party chairwoman Khatuna Samnidze said at the presentation.