UNM demands snap election, a year before scheduled one

UNM demands snap election, a year before scheduled one 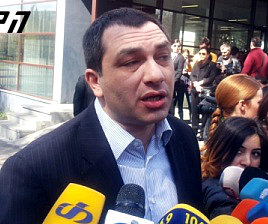 TBILISI, DFWatch–Georgia’s former ruling party the National Movement demands a snap election, a year before the next scheduled parliamentary election.

At a demonstration by party activists outside the residence of businessman Bidzina Ivanishvili Monday, Giga Bokeria said that there will begin negotiations with other political parties about the government’s resignation and holding a snap election.

The precursor to last night’s protest was that a court placed three ‘Free Zone’ activists in pre-trial detention after they physically assaulted a member of parliament from the government coalition. Free Zone supports the National Movement.

Georgia is expected to go to the polls in October, 2016. The previous parliamentary election was on October 1, 2012.

The National Movement was in government from 2004 to 2012, but lost in the last election for parliament.