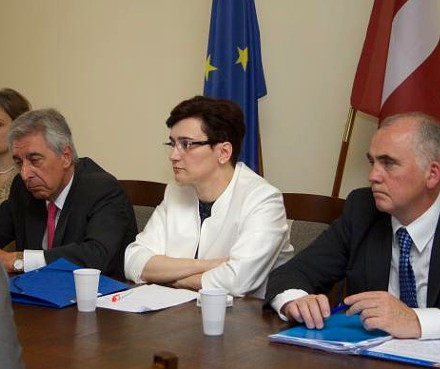 Nona Tsotsoria (center) at a meeting with Supreme Court judges in Latvia. (Photo published by the Latvian government.)

TBILISI, DFWatch–The opposition in Georgia claims the police raided the flat of a judge’s brother to put pressure on the judge after an unfavorable decision in the ECHR.

Police carried out a raid Thursday night in the flat of brother of a judge who currently represents Georgia in the European Court of Human Rights (ECHR) and claim they found an illegal firearm and ammunition.

The search of the flat of Otar Tsotsoria, brother of ECHR judge Nona Tsotsoria, was done based on a tip-off from an informant, police said.

Ministry of Internal Affairs has released no other details.

Nona Tsotsoria has served at ECHR as a sole judge representing Georgia since 2008 and is believed to be politically sympathetic to the National Movement, the party which held power from 2004 to 2012 and is most known for its leader, former President Mikheil Saakashvili.

Because of her known political affiliation, and a recent ECHR ruling that went against the Georgian Dream government, members of the UNM think the search of the judge’s brother’s flat is a form of political pressure.

In its decision last March, the ECHR suspended a ruling by Georgia’s Supreme Court about changing the ownership of the opposition-leaning TV company Rustavi 2. This decision immediately raised suspicion in Georgian Dream that it had been facilitated by Nona Tsotsoria’s efforts.

When the police now search her brother’s flat, it is seen by some in UNM as politically motivated.

“She is participating in the review of cases which create serious discomfort for the government […] In these circumstances, the search [of judge’s family member flat] raises serious suspicion that it may be retaliation from the authorities or attempts to put pressure on the judge,” an opposition MP, Otar Kakhidze, told Rustavi 2.

He added that there are several high-profile cases under scrutiny of the ECHR, including the Rustavi 2 case, which strengthens this suspicion.

Besides Rustavi 2, there are other high-profile cases under consideration of the ECHR, including those concerning imprisonment of ex-PM Vano Merabishvili and Tbilisi former mayor Gigi Ugulava.