Unloading of containers halted in Poti port as workers negotiate

Unloading of containers halted in Poti port as workers negotiate 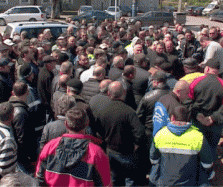 TBILISI, DFWatch–Unloading of containers and some other operations have been halted in the port in Poti due to a strike among workers.

Most other types of operations are not affected by the strike, according to the company that runs the port.

The strike began yesterday after a deadline set by the workers expired. They demand a 14% pay rise, review of their conditions, to agree on collective contracts and a so-called 13th salary every year.

Attempts are now being made to negotiate between workers and management.

The strike is joined by several hundred workers in a company which employs more than a thousand people.

Management have accused the workers of violating the law by not notifying the company about the strike beforehand.

They have agreed to some of the strikers’ demands, but when it comes to the main demand about a 14 percent pay rise, the company says it is not possible to increase salaries at once, but quarterly growth may be possible.

As the strike continues, some of the protesters are now in a meeting with the management.