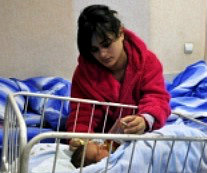 TBILISI, DFWatch–46 percent of Georgian families would like to have a son instead of a daughter. Nine percent have the opposite preference, while women with partners or husbands admit they have had an abortion because of the sex of child.

These are some of the findings of a study about gender biased sex selection in Georgia, carried out by United Nations Population Fund (UNFPA).

Many of the families, especially men, as heads of families, think that it is a must to have at least one son, because this will ‘expand the surname.’ In Georgia, like in many other countries, the child gets its surname from the father. Most of the interviewees named this reason for why they wanted a son and not a daughter.

In recent years, the situation has improved slightly to 107 boys for every 100 girls in 2014 according to GeoStat, although it is hard to rely fully on figures from the bureau after a census showed that it has overestimated the size of Georgia’s population by 15%.

The authors of the report recommend continuing the monitoring of gender imbalance at birth and increasing the awareness among people, to counter gender inequality in society and families.

Vice Speaker of Parliament Manana Kobakhidze said at the presentation of the report that gender inequality is a big problem in Georgia and the reasons are social and economic.

Research for the study was supported by the World Bank.