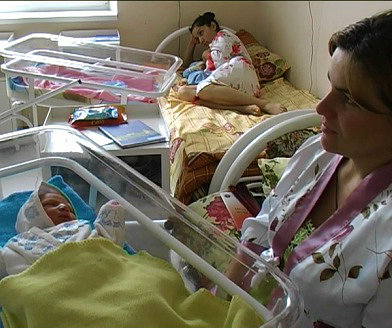 The maternity ward at Gali hospital was renovated with the help of UNDP. (Frame from UN’s video report.)

TBILISI, DFWatch–The United Nations is ready to finance projects in Abkhazia with USD 15 million this year.

Resident Coordinator for the UN Development Program in Georgia, Niels Scott, told this to de facto President Aleksandre Ankvab, according to Apsnypress.

Ankvab talked about the social projects that may be carried out with the help of the UN and invited Scott to also look at facilities that have been renovated with Russian aid money.

“This is a real concrete help,” Ankvab said, according to Apsnypress, which quotes the Abkhazian president’s press service.

It recently renovated a school in Chuburkhinji, and helped refurbish and equip maternity wards in Gali and Gagra hospitals. Through use of mobile labs, in one year more than 4,200 people were offered services like tests for HIV/AIDS, Hepatitis and other diseases.

Scott also noted that the amount of aid may be increased if the leadership of Abkhazia directly applies to donor countries and the UN and convinces them of the need to invest in Abkhazia.

An article published by UNDP Georgia says the direct donors are Sweden, through Swedish International Development Cooperation Agency, the government of Romania and the European Union.

The last two decades Abkhazia has been under the control of a separatist government propped up by Moscow.

Georgian Minister for Reconciliation and Civic Equality, Paata Zakareishvili, thinks the UN’s involvement in the breakaway region is appropriate.

“UNDP implements projects cooperating with Georgian government every year, regularly in Abkhazia, as an integral part of Georgia,” said Zakareishvili.

“We wish to offer residents of Abkhazia European and Western values. We think the UN’s involvement is an action in this direction,” he added.