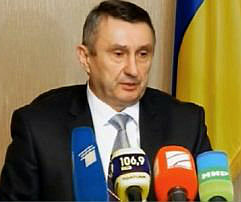 TBILISI, DFWatch–Ukraine’s ambassador to Georgia on Monday defended his country’s appointment of Georgian officials who ex-President Saakashvili as an adviser, after being called in to the Foreign Ministry in Tbilisi.

Saakashvili is wanted in four criminal cases in his home country, but Ukrainian leader Petro Poroshenko appointed him head of the Advisory International Council of Reforms a few days ago.

Ukrainian Ambassador Vasyl Tsybenko said after the meeting at the ministry that Ukraine is an independent state and has a right to make the decisions they think are necessary.

He was called to the ministry to explain not only Saakashvili’s appointment, but also other former government officials from his period in power, including ex-Justice Minister Zurab Adeishvili, who is subject to an Interpol search, a so-called Red Alert. Georgia has also asked Interpol to send out a Red Alert for Saakashvili, but no decision has been made yet.

Another of Saakashvili’s people was appointed in Ukraine on Tuesday: Davit Sakvarelidze, currently a member of the Georgian parliament for the National Movement. He will now serve as Ukraine’s Deputy Chief Prosecutor; the same position as he had in Georgia during the former regime.

Two other former officials are also in high government positions: a health minister and a deputy interior minister.

Tsybenko said he discussed the appointment of Saakashvili and the environment of meeting was ‘friendly’ and ‘constructive.’

“Finally this is our domestic business of the state. On the other hand, the president has foreseen the national interests of Ukraine by appointment of Mikheil Saakashvili considering experience of ex-president of Georgia in terms of reforms, modernization of army, attraction of foreign investments, etc.”

He also said that the president is assured that this decision is not directed against Georgian people and is not a threat to the cooperation between the two states.

“As for the concern of the Georgian party, Ukraine studies this issue very carefully,” he added.

On Monday, Chief Prosecutor Viktor Shokin of Ukraine appointed David Sakvarelidze, former Deputy Chief Prosecutor and now a member of the Georgian parliament, as his deputy. He said that Sakvarelidze will be working with staffing issues and reform of the prosecutor’s office.

Eka Kherkheulidze, member of the UNM who had been MP in previous parliamentary assembly, will likely replace Sakvarelidze. She told Interpressnews that UNM will introduce her in parliament next week.