U.S. to strengthen its military cooperation with Georgia

U.S. to strengthen its military cooperation with Georgia 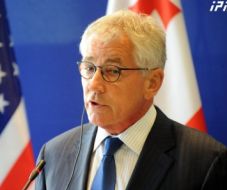 TBILISI, DFWatch–The United States is strengthening its military cooperation with Georgia and several non NATO-member states on the background of events in Ukraine.

US is a strategic partner of Georgia and supports its North-Atlantic integration, US Secretary of Defense Chuck Hagel said during a two day visit to Georgia after the NATO summit in Wales.

He met Sunday with the president, prime minister and defense minister and also visited a memorial for the soldiers who died in Georgia’s internal wars. Hagel also went to the national military education center in Krtsanisi and addressed Georgian soldiers and American naval infantry service members.

After the meeting with President Giorgi Margvelashvili, which was closed for the media, the president’s press office reported that the main topic of their discussion was the results of the Wales NATO summit and the package which NATO offered to Georgia in order to prepare for it joining the alliance in the future, and for strengthening security and defense.

Teona Akubardia, Deputy Secretary of the Security Council, told DF Watch that it is about a decision made at the NATO summit which will grant Georgia a package of strengthened cooperation, which includes strengthening the country’s defense ability, and with this as goal, a group of NATO military advisers will be sent to the Defense Ministry. A training center will be set up which will be the only one in the region, and NATO soldiers will hold joint exercises with soldiers from partner countries together with Georgian armed forces.

She said the package also includes supplying Georgia with defensive means, including air defenses, which is very important to ensure the country’s defense ability, and expand the NATO liaison office.

“On the one hand, this increases the compatibility of the country’s armed forces with NATO’s armed forces and on the other hand, it is an important step on the way to Georgia’s NATO integration,” Akubardia says.

Hagel thanked the president on behalf of the US government for Georgia’s contribution to the ISAF mission in Afghanistan. They also discussed the situation in Ukraine, as well as Georgia’s occupied territories and Russia-Georgia relations.

During the meeting with Prime Minister Irakli Gharibashvili, Hagel passed along greetings from the US president and said the US will continue supporting Georgia in strengthening democracy and on the way to North-Atlantic integration.

Gharibashvili met with Hagel together with five ministers. During the meeting they discussed issues related to the defense ability of the state. Ambassadors in Georgia, head of the Joint Staff and head of the Crisis Management Council participated in the meeting. The ministers for defense, interior, foreign affairs, and Euro-Atlantic integration also attended the meeting.

During the meetings, Hagel declared that the parties discussed supplying Georgia with US military helicopters. Defense Minister Irakli Alasania said it is important to renew the military’s helicopters as it increases the ability of the armed forces.

The Defense Ministry informed several months ago that the country was planning to renew its helicopters and now it is about Sikorsky Blackhawk type of helicopters which Georgia is going to purchase from the US.

Hagel said during the meeting that they discussed prices and accessibility, as well as other details of the helicopter purchase. He said the US will do more in order to increase Georgia’s defense ability.

“Well, I came to Georgia right after the NATO Summit for many reasons. But a primary reason was to emphasize to our Georgian partners, to people of Georgia how the United States values your relationship,” Hagel said at a meeting with Georgian soldiers and US marines.

He said him and Alasania discussed the package offered by NATO, which will strengthen ties between NATO and Georgia, and the necessary steps for Georgia’s helicopter purchase.

Hagel also said they discussed a possible role for Georgia in the US coalition against Islamic State. He said they talked about whether Georgia can fulfill an important role in order to destroy the threat from ISIL (Islamic State of Iraq and the Levant) with the US and coalition partners.

He didn’t specify what role exactly Georgia will play in this.

“We as a strategic partner of the US and trusty ally completely support what the US does to eliminate those barbarians,” Alasania said.

The secretary of the Security Council said that this was a political statement, and later there will be a discussion about the details.