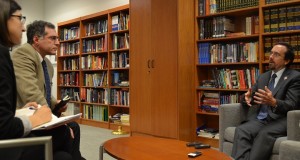 TBILISI, DFWatch – DF Watch sat down with U.S. Ambassador to Georgia, John Bass, for a conversation about the situation in the country.

For the latest two months about twenty cases were observed, when government representatives interrupted media activity and in some cases it was even expressed in physical and mental influence. Media and non-governmental organizations number of times expressed protest against those actions. There is problem of accessibility to free and diverse media. What would your position  be on this issue?

I think with the respect to the media environment I would offer on top of what is in the report, is an observation based on of almost three years of residence here, which is I think a lot of the problems and challenges around media and journalism. Center on the phenomenon that they are unfortunately an extension of the polarized politics in the country and too often I see the media outlets that line up with one of the political spectrum or the other and as a consequence of that too often individual media outlets are perceived to be identified as in the minds of people in the society and I would say particularly outside of Georgia in the minds of often local government officials as identified with particular political point of view and I think too often there appeared to be instances in which officials are making decisions about access to events and access to information not in impartial manner but in a manner according to where they perceive individual media outlets to fall on that political spectrum. And I would say that this phenomenon is also tied to another one we identify in the report, which is the lack of uniformity in the way of rule of law is applied across the society and do if I act to identify let’s say one two things that I think would be most important to address the phenomenon you described it would be to ensure that there is more uniform application of the laws in existence regarding access to information by the media and by the public, which is to say, it’s important for all ministries to respond to public inquiries in accordance with the law. And I think its also important that media outlets be granted equal access to public meetings, to other public events and to ensure that there is not the degree of selectivity being applied in which media outlets will be allowed to cover specific events unless there is very compelling reason why you would need to go to something like a pool coverage coverage in which case then there would be appropriate sharing after the fact for the latter set of journalists.

In the report there is also described problems in regard of justice system in Georgia. There are problems about court using law in objective and equal ways. Naturally, it’s very serious issue, which becomes even more important during election process in election year, when court might have many cases; not only criminal law or administrative, but political issues, election issues to review. On this background we face harassment of political opposition. What does it mean, what value court has when there are facts of political opposition harassment, unequal usage of law in regards of objectivity at courts?

Setting aside your characterization of that particular size, let me, which I’m not saying I completely accept, let me speak to this broader issue what we believe that judiciaries’ appropriate role as part of government and democratic society and also specifically in the context of an election environment and campaign environment, which is pretty polarized here in Georgia. We believe that independent judiciary is cornerstone of the democratic society that judges just as soldiers of their legions to a country and not to an individual and in our case we all swear an oath to the constitution of the USA not to an individual, we believe that judicial figures, judges owe their first allegiance  to the body of law in a country and need to apply that body of law in evaluating specific facts of violations of the law, which come before them. That requires judges to have the ability and the discipline to take half step back if you will out of immediacy of the situation, politics in the situation and in some cases to set aside their personal beliefs about a particular case in order to fairly apply of the law. Development of maintenance  of that philosophical approach to the loan to the responsibilities, associate with it, that takes time to develop both within a person or broader organization on cultural basis, you know it’s not something that developed over a night in USA and at the comparable point in our historical experience, there was still a degree of uncertainty about the role our constitutional court would be playing in society for example.

Here in Georgia, i think as I’ve said before that the development of the judiciary to that point is still is in working progress theres been some important progress in creating a new set of qualified judges who have a modern orientation who have a set of training that’s grounded in legal canonine practice of democratic societies, but there’s still a ways to go before that philosophy is seeded deeply enough institutionally, for them, to consistently, I would say take rulings which may discomfort government. To these standards that the individual judges are approaching specific cases related to campaign envrionemnt or campaign financing other electoral cases will be going forward in something other than the impartial manner, that’s of concern to us because in part the corrosive impact it has on public perceptions of the legitimacy of the elections and I extension the democratic institutions.

For example this famous case about Bidzina Ivanishvili’s citizenship, that’s why I related this issue to the question, because it was really important issue and many questions appeared in the society.

Well I am not an expert in Georgian law, jurisprundecne and I would say obviously this is the case that’s going to have considerable interest of us and others, particularly given the potential for it to disenfranchise someone from their ability to participate in the political process, I have heard in talking to a lo t of different people about it, I have heard range of opinions about whether the way in which this case has been  adjudicated it is or it is not in accordance with law it is not for me to pronounce what I think is the proper outcome. I think the important thing here is, is there a legal remedy that allows mr ivanishvili to participate in politics, to participate in political life, to participate in the upcoming elections or not? And I think its important again, you know people often, again in every democratic society, people often take to courts things that should be settled down outside the court because they are seeking to create a situation that doesn’t require them to compromise and I think its important that the courts are used appropriately for matters of law and for politics to occur in the political sphere. And I think when law is tangled into politics in a way where the most of political activity is happening in a courtroom that’s not good and  healthy for democratic development.

I have question about prisons, report says there is no accordance with international standards, and the report of Georgia’s Public Defender describes trend tat death cases increased in prisons. How you see this issue, what will your comment be?

Well I think the area you just identified, prison conditions is in the report the highest concern that we have identified ongoing, I think it’s important to note that there has been some good progress, there’ve been some new prisons opened with better conditions and that’s work in the right direction but clearly there’s s some more work needs to be done there are some facilities that are well below European and international standards, and clearly there needs to be some additional work on things like training and health care, to address the variety of factors which seem to be contributing to an unusually high death rate. And I think particularly when the death rate any kind of death rate is increasing in the penitentiary system and the numbers are either static or declining that should be a cause of concern for the authorities  and they should want to begin to identify why its happening and I think its frankly its not the only the responsibility or shouldn’t be the responsibility  of the ministry of corrections but also  I would hope there would be a certain amount of curiosity from members of parliament about why this trend is going into this direction and in that regard, you know I would hope there would be some additional discussion and potentially some legislative action addressed to the ombudsman’s report

24 Saati: In the report there are facts about inequality in media and unequal conditions towards opposition. How is it possible to conduct elections which will come in line with democratic standards?

I think that there is pretty good legal framework in Georgia, I think there are some areas where it could be further improved that would make a material difference I think arguably the most important change that we would see in contributing to a more competitive campaign environment and to the range and depth of information that is available to the citizens to make their decisions in the upcoming elections would be the institution of something we call “must-carry” provision under which broadcast providers are required to carry a range of channels not solely those which align with their individual political orientation or in some cases which are most profitable for their companies our philosophy in the states and it’s the case in a lot of democratic societies is that the communication spectrum if you will is a public good and there’s a limited scale on size to it and therefore government has an appropriate role to play in insuring that the private use of that public good,  in this case the broadcast spectrum, is managed in a way that has public benefits even as the private companies that are using the public good derive profit from it  and our philosophy is that if private companies are receiving a benefit from this they should be providing in turn a benefit and have an obligation to do so and so I think that’s the kind of change that I think would be an important additional contribution. Now having said that I think there is a pretty good framework in place the question is how well and uniformly it would be applied across the political spectrum.