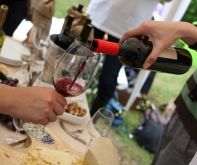 From a wine festival in Sighnaghi in 2013. (Click on image to read about the festival.) (Interpressnews.)

TBILISI, DFWatch–Georgia exported 26,872,145 bottles of wine in the first half of 2014. Out of the 34 different countries receiving the wine, two thirds of it went to Russia.

In sheer volume, the almost 27 million bottles, each 0.75 liters, if put together represent over 20 million liters of wine. This is a 136 percent increase from the same period last year.

According to the National Wine Agency, which on July 2 published new data on wine export, the top five countries to buy Georgian wine are Russia, Ukraine, Kazakhstan, Poland and China.

a total of 17,901,244 bottles were exported to Russia, which is 66 percent of Georgia’s entire wine export.

Russia imposed an embargo on Georgian and Moldovan wine in 2006. It was lifted in the end of 2012 after a new government came to power in Georgia on a promise to mend relations with Russia.