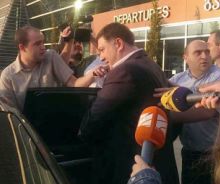 TBILISI, DFWatch–Former Mayor Gigi Ugulava was detained Thursday morning at Tbilisi airport as he was about to leave for Ukraine. He is accused of money laundering.

The Finance Ministry’s investigation service on Monday brought new charges against Ugulava, this time about embezzlement of money from parking fees.

But the city court on Tuesday decided not to set any bail conditions for him and the justice minister promised that he would not be detained until the second round of the local election has been held.

But the investigation service today presented even one more charge against Ugulava. This concerns laundering of a large amount money through a company registered off-shore, and using the money to finance the National Movement’s election campaign.

Investigators claim that USD 1,500,000 was about to be transferred from an an off-shore company on the basis of a fictitious agreement, but a lower amount, USD 760,000 was transferred, which Ugulava used for party interests, the investigative service argues, adding that he carried out this plan together with several other people.

Giorgi Grdzelishvili, head of the press office at the investigation service, said on Thursday that the reason Ugulava was detained was that they have information that he was planning to run away to avoid prosecution. He also said that Ugulava changed the schedule of his trip twice.

“He first bought one ticked, then changed it. There was information that he wouldn’t come back in Georgia,” he added.

As he was taken into custody at Tbilisi airport Thursday, Ugulava said he was detained only because he doesn’t bow to former Prime Minister Bidzina Ivanishvili, who despite having resigned is believed to be still pulling the strings in the government.

Interior Minister Alexandre Chikaidze told journalists that Ugulava was warned by the police not to leave Georgia, because he was to be summoned for questioning again.

“Despite having been warned, he decided to leave the country. That’s why he was detained,” Chikaidze said.

The National Movement said in a statement that the detention of Ugulava is aimed at incapacitating Georgia’s ‘main opposition party’ and marks a deepening of the Government’s agenda of political retribution and persecution of the opposition while there is second round of local election ahead.

“Ugulava was crucial in achieving runoffs in the capital where the government insisted on outright victory,” statement reads. “UNM also believes Mr Ugulava’s arrest is a personal decision of oligarch Bidzina Ivanishvili who remains the main decision maker of the Georgian government, despite not holding any formal office.”

Ugulava was planning to go to Kiev with UNM member Giga Bokeria to meet with the Ukrainian patriarch. He was planning to return in the evening and showed journalists his return ticket. He may be jailed from nine to 12 years.