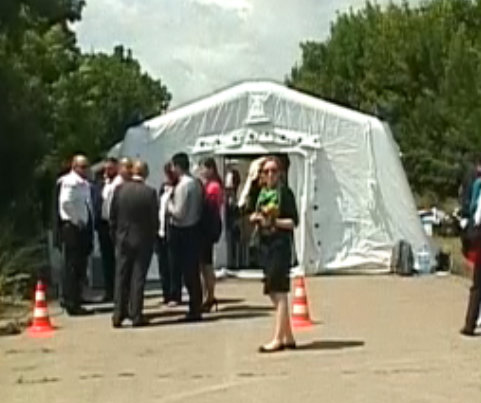 The EU-hosted field meetings take place in a tent on the de facto border. (From a video published by Georgia’s Ministry of Internal Affairs.)

As usual, the Incident Response and Prevention Mechanism (IRPM) meeting took place in a tent at Ergneti, a border village close to Tskhinvali, the region’s capital.

The regular IPRM meetings were established by the EU as a way to defuse tensions and solve practical problems about detentions and how civilians are affected by the conflict. The EU claims its staff is neutral and only facilitating dialogue.

But after Tuesday’s meeting, South Ossetia’s negotiator Khokh Gagloyty told news agency RES that the EU’s Monitoring Mission to Georgia (EUMM) has failed to react to disturbances at the border. He said the Ossetian side has protested against actions by the Georgian police at the border, which his side believe are deliberate provocations.

Gagloyty also objected against demonstrations that have been held by people on the Georgian side, the latest one on June 21 north of the village Ditsi. He also pointed to a demonstration in March, at the height of the international tension surrounding Russia’s annexation of Crimea, and criticized the EUMM for failing to react.

But EUMM spokesperson Ann Vaessen rejects the notion that the EU’s field observers are biased.

“I wouldn’t really comment to that. What I would say is that we always react through the activation of the hotline and the IPRM whenever we consider that there is a risk for the stability on the ground, and risk of escalation, and we do that in full impartiality. We are of course impartial,” she says.

After the OSCE’s mission in South Ossetia and the UN’s UNOMIG mission in Abkhazia both ended in 2009, international observers have not had access to these regions. Vaessen says EUMM reports anything that might have consequences for the stability in the area adjacent to South Ossetia and Abkhazia, but that it would be helpful if the EU’s observers had access also inside the breakaway territories to have a more comprehensive overview of the situation.

“We report anything that we consider might be dangerous for the stability in the region, and as far as I know, demonstrations are allowed – anybody can demonstrate – and in these situations we have not assessed that it could constitute a risk to the stability on the ground,” she says.

Also at this 46th IPRM meeting, the four parties discussed cases of missing or detained persons. Georgia’s Interior Ministry said it asked South Ossetia to confirm that Soman Shitikov, a soldier, is in fact being held in Tskhinvali. Georgia’s ombudsman May 19 said one of his staff had interviewed a person who said he had shared a cell with Shitikov in Tskhinvali.

According to RES, Georgia also expressed concern about a resident of Akhalgori/Leningor who went missing; David Basharuli.

One further topic was the so-called borderization; the installation of barbed wire and fences along the de facto border by Russian soldiers, who have been guarding it since the war in 2008.

Georgia protested against new so-called borderization activity in Kere, near the town Gori, and at the village Otrevi, as well as restrictions on agricultural lands in Akhalgori. Representatives of the de facto government said they need to study this issue more thoroughly.