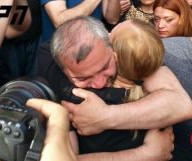 First Lady Maka Chichua hugging Zaza Saralidze, father of one of the murder victims, outside the office of the Chief Prosecutor on Thursday. (Interpressnews.)

TBILISI, DFWatch–A furious crowd of demonstrators converged on parliament Thursday evening in response to the controversial verdict in the trial of two slayed teenagers. Many in Georgia believe law enforcers granted impunity to one or more persons implicated in the crime and that the real murderers still haven’t been charged.

The murder of high schoolers Levan Dadunashvili and Davit Saralidze shocked Georgia and the trial has attracted intense public interest.

Thursday the court read its verdict: It found one defendant guilty of murdering Levan Dadunashvili near the school while another boy who was charged with the murder of Davit Saralidze was also found guilty, but not of homicide but attempted murder, which carries a lighter sentence.

The father of Davit Saralidze, Zaza, has told media he suspects the Prosecutor’s Office of obscuring the case and not going after the real killers. After the court’s decision he called on people to demonstrate outside the Chief Prosecutor’s Office. The spontaneous protest quickly grew into a large rally that gathered in front of the old parliament building.

Many Georgians think one or more young people implicated in the crime were granted impunity, a concern also raised by the public defender.

“The court’s verdict confirms the suspicion that the investigation has not fully revealed the perpetrators of Saralidze’s murder,” Public Defender Nino Lomjaria said in her comments about the case on Thursday.

The parliament voted in favor of establishing a special parliamentary fact-finding commission to inquire into the issue.

The two boys, Levan Dadunashvili and Davit Saralidze, were stabbed to death just after class about 200 meters from their school on Khorava Street in the Vere district of downtown Tbilisi. The murders occurred during a melee between students of Tbilisi’s two, 51st and 1st, schools.

The murder shocked Georgians, invoking memories of ugly turf wars among youth in the 1990s and setting off a debate about safety in schools and more generally the situation in Georgia’s education system.

Mirza Subeliani, a prosecutor at the Prosecutor Office of Georgia, resigned soon after the incident, admitting that his son was “a witness” to the fight.

Zaza Saralidze, the father of one of the victims, has repeatedly accused Mirza Subeliani and, generally, the POG of interfering in the case in order to grant impunity to some of the perpetrators.

The case has attracted a lot of public attention and intense media scrutiny; Thursday’s verdict was therefore a shock for many Georgians who blame the authorities of either inaction or improper handling of the crime.