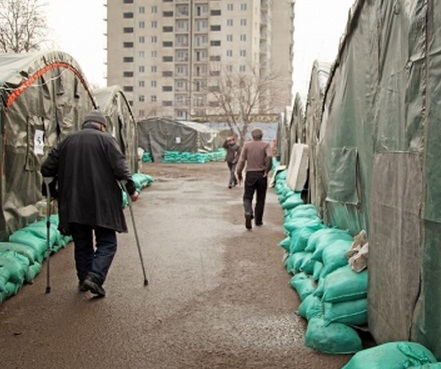 The homeless shelter in Tbilisi. (Interpressnews.)

TBILISI, DFWatch–Two people have died during the last two days in shelter tents which were put up in Tbilisi and Gori to help homeless people get through the winter.

A woman died January 11 in a tent in Tbilisi. The cause of death is still unknown.

The woman was brought to the shelter a few weeks ago. According to Deputy Health Minister Dimitry Makhatadze, she was being attended to by doctors since the day she was brought in at the ten camp on Moscow Avenue.

The victim didn’t have any particular diagnosis or complaint. The deputy minister says law enforcers will not conduct an investigation, but medical experts will determine why she died.

The woman, who was about 60 years old, was brought in to the shelter by patrol police on December 30.

A day before, a man aged 52 died in the shelter tents in Gori, a town west of the capital.

Other inhabitants at the shelter say the man was an alcohol addict and they think the cause of death might have been drinking; however there is no official cause of his death at this time.

The man was living in the shelter for only three days. He didn’t have any relatives and used to live on the streets.

Zurab Utiashvili, Head of Emergency Service Department, told Interpressnews that for a month inhabitants of the tent shelters in Tbilisi have asked for assistance by a doctor more than 1 600 times. In 18 of the cases, it was an emergency and the person was rushed to the hospital, while 38 others who were not in immediate danger were also taken to the hospital.

Many of the homeless people in tents have different diseases after living on the streets for a long time. There is a crew of doctors at the tents who are working round the clock. There is a bathroom where disinfection is conducted every 2-3 hours. There are two meals per day provided, as well as medicines, towels and hygiene articles.

Utiashvili says the number of inhabitants changes daily. There was a case when 223 people spent the night there. At the moment, 170 homeless people are living in the Tbilisi camp, three persons in Gori and 6 in Kutaisi.