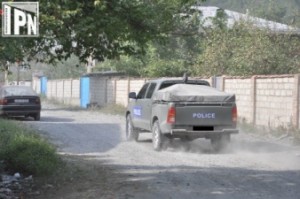 Three military cars now moved to the valley. Operation continues 30 km away from a village Lapankuri on Russian-Georgian border. (IPN)

According to Georgian officials all hostages released in the special forces operation against unidentified rebels crossing the border from the Russian side.

The deadly clashes erupted 30 km away from the village Lapankuri in a mountainous area covered by forest, in the eastern part of Georgia bordering with the Russia’s most volatile republic Dagestan, the epicenter of fierce fighting between local law enforcers and Islamist militia.

All through the night, police units and ambulances passed through the village heading toward the border. Up to 400 employees were brought from the Interior Ministry Wednesday morning.

Pro-government TV Rustavi 2 were first to report about injured this morning. According to their information, the interior ministry’s operation aimed at releasing a group of hostages, local civilians.

Local population relates this case to the recent disappearance of five men. Their family members spoke about kidnapping. All five were released and interrogated on Wednesday.

According to Rustavi 2, the five were only the first group of hostages. The operation continued to release a second group. Three groups of hostages were taken by the apparent rebels.

Shota Khizanishvili, Deputy Interior Minister, stated that all hostages had been released by Wednesday afternoon. Among the dead are two employees of the Special Unit and one military doctor, an employee of Ministry of Defence. Five employees of special units are injured. Special forces are still engaged in combat with the rebels. No information about the later released so far.

Later the MOD and the MIA names of those dead. Solomon Tsiklauri and Archil Chokheli, from the MIA and Vladimer Khvedelidze, a Corporal Doctor, from the MOD.

According to the agency, they left to go fishing. They ran out of cigarettes and two of them left to buy it. Some time later others tried to find them, but only stumbled upon their empty car.

The interior ministry released a video of the interrogation, where they say that they were taken as hostages and were threatened with being killed if they resisted or tried to escape.

“We left for the mountains to have a picnic there. Upon returning nearby the river bank we met several heavily armed bearded men. They told us we were hostages and we should leave with them. They warned that if we tried to escape they would kill us,” one of the former hostages says.

Another one recalls that there were more than fifteen armed people. The parents of all five demand their sons to be returned from interrogation.

Information Center for Kakheti, a local news agency, reported on Wednesday afternoon that there is no electricity in the village Lapankuri, near the scene of the fighing.

Local journalists report that three military cars now moved into the valley. The operation continues 30 km away from the village Lapankuri on the Russian-Georgian border.