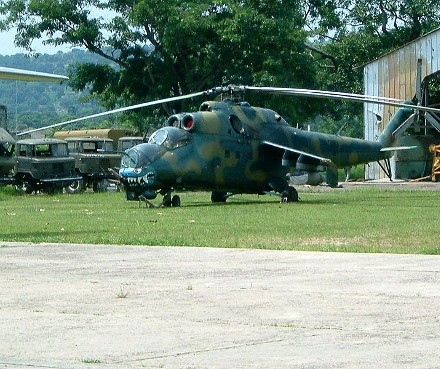 The two captured Georgian contractors were in a Mi-24 military attack helicopter belonging to the DR Congo armed forces. (davric/Wikimedia.)

TBILISI, DFWatch–Two Georgian private contractors are being held captive in the Democratic Republic of the Congo, after the military helicopter they were in crash landed in the east of the country nearly a month ago.

Georgia’s Ministry of Defense said Wednesday evening that the two Georgian crew members were taken captive. One of them is injured, the ministry said.

The circumstances of the January 27 incident in North-Kivu involving DR Congo army helicopters are still unclear. The helicopter may have crashed or been downed by the rebels.

The two Georgian helicopter crew members are there on private contracts, Georgia has said. The other helicopter had crew from Belarus.

One of the captured is Soso Osurauli who served in Georgia’s armed forces but retired in 2014, according to the Ministry of Defense. He served as a helicopter pilot with the DR Congo armed forces and was flying the helicopter at the time of the crash.

The identity and position of the second Georgian has not been released. It was said that he was injured during the crash but his injuries are not life threatening, Georgia’s ambassador to South Africa told media.

There have been unconfirmed reports that the captors have demanded ransom of up to USD 1 million. The Georgian government vows to free its captured citizens.

The helicopters crashed in an area loosely controlled by M23, an eastern Congolese rebel group formed by ethnic Tutsis.

In Rwanda in the early 1990s there were several instances of mass killing of Tutsis who are an elite social group but a numerical minority in many states in the central parts of the African continent. Mass killings of hundreds of thousands of Tutsis in Rwanda in 1994, dubbed the Rwanda Genocide, sparked global outrage and led to a strong response from the international community.