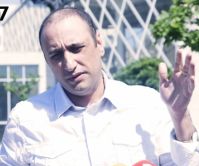 Guram Donadze was also questioned, but said he had nothing to do with the fake video. (Interpressnews.)

TBILISI, DFWatch–The Chief Prosecutor in Georgia has ordered the arrest of former officials at the Constitutional Security Department (CSD), after they were questioned about the cases against Bacho and Data Akhalaia.

Former CSD head Levan Kardava and Giorgi Mazmishvili, an employee at the same department, have been arrested.

Levan Kardava is brother of Megis Kardava, a former employee of the Ministry of Internal Affairs. Both brothers held high positions in law enforcement agencies while Saakashvili was president, and there were unconfirmed reports about them treating people cruelly.

Megis Kardava is currently wanted by Interpol for several criminal charges. In January, he was charged with torturing a prisoner to get confession about preparing a terrorist act. The new charges against him are related to 21 year old Eldar Kobalia, who was arrested on April 2, 2011, and died in prison after nine days.

Levan Kardava was arrested together with George Mazmiashvili after 5 hours of questioning. According to the Prosecutor’s Office, they were arrested for murder, abuse of power and falsifying evidence, and the former director of the department, Data Akhalaia, has been charged too.

According to the Prosecutor’s Office, this is related to CSD’s special operation near Navtlughi bus station, where three young men were brutally killed: Marad Artmeladze, Roman Surmanidze and Murad Gorgadze.

Murad Gorgadze was brother of a prisoner, Gia Gorgadze, and the official reason for conducting the special operation was a suspicion that they were planning a prison riot, the Prosecutor’s Office says.

“With David Akhalaia’s organization, they (CSD employees) surrounded innocent youngsters and did not give them even a theoretical chance to survive,” states Prosecutor’s Office and claims that Akhalaia, Mazmishvili and others shot Artmeladze 5 times, Surmanidze 6 times and Gorgadze 12 times.

In order to claim that Gorgadze, Surmanidze and Artmeladze resisted them, they falsified evidence. Then, Guram Donadze, former head of Interior Ministry’s press office, filmed a staged enactment of the special operation on video to show the public.

Bacho (Bachana) Akhalaia was told that his brother killed three people. To strengthen the version of planned riot, he went to Number 1 prison in Rustavi and brutally tortured newly killed Shota Gorgadze’s brother, Gia Gorgadze, and other prisoners, the Prosecutor’s Office says.

Guram Donadze was questioned on Thursday. He told journalists that he has nothing to do with the falsified video.

“I want to underline that I have not filmed that clip, I was not there during the special operation. I have not edited anything. Investigators already know this,” Donadze said.