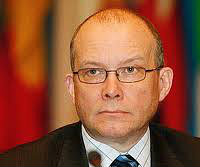 Antti Turunen, UN Secretary General’s Representative for Georgia, who was part of the delegation. (Photo by OSCE/Dieter Nagl.)

TBILISI, DFWatch–Representatives of the United Nations, OSCE and European Union this week paid a two-day visit to South Ossetia and met with members of the breakaway region’s delegation to the Geneva talks.

The delegation consisted of co-chairs of the talks, which have been held regularly since the 2008 war.

On Tuesday, they visited a site near the de facto border which surrounds South Ossetia, a place close to Ditsi.

The breakaway region’s news agency RES writes that “they had an opportunity to see the work on engineering arrangement of the state border.”

Ditsi is a village where Russian soldiers have installed barbed wire and fences which have cut through agriculture lands of the local population.

According to RES, the visit was organized by the de facto government in order to respond to the ‘Georgian provocation’ in that place, referring to a recent demonstration which took place on the other side of the fences, in Atotsi.

The de facto government’s envoy Murat Dzhioev said they also talked about work to find missing South Ossetians and those who are serving sentences in Georgian prisons.

As a gesture of good will, the de facto authorities decided to hand over to Georgia one detainee, Taymuraz Dzherapov, and expressed hope that Tbilisi will appreciate the move and reciprocate.

There has been a chronic problem with people being detained for crossing the border which is being disputed by Georgia, and handling this issue has been a mainstay of the regular field meetings within the Incidents Prevention and Response Mechanism (IPRM), another arena for which the conflict parties to meet and resolve issues, hosted by the EU.

RES quotes Antti Turunen, Representative of the UN Secretary General for Georgia, who noted that the meeting was held in a constructive atmosphere and expressed hope that the experience gained over the course of the last five years will help to speed up the work.

“We are pleased that the South Ossetian side is ready to continue the dialogue, which is very important to ensure security and stability in the region,” Turunen said.

According to the news agency RES they discussed the upcoming round of Geneva talks which will take place on March 27.

Angelo Gnaedinger, OSCE Special Representative for the South Caucasus, said that during the meeting they discussed effectiveness of the meetings of IPRM. He said IPRM meetings is an important tool to ensure the safety of people in the region.

Björn Kühne, Political Advisor at EU Special Representative for the South Caucasus, said after the meeting that there is a discussion about who will replace Philippe Lefort as co-chair from the EU. Lefort has served out his term and a new co-chair has not yet been appointed.

On Wednesday, the delegation was planning to visit the valley region which Georgia calls Akhalgori, but South Ossetia has renamed Leningor. It lies only 50 km from Tbilisi and though part of South Ossetia during the Soviet Union, was controlled by Tbilisi from the war in 1991-92 until the war in 2008, when Russia brought it under Tskhinvali’s control.