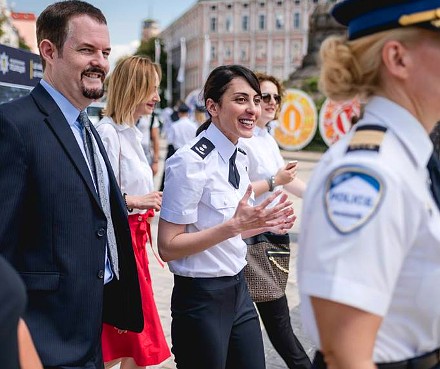 TBILISI, DFWatch–Two young men related to government critics were arrested in Tbilisi on Tuesday on drug charges. Their mothers think it was politically motivated.

One of the detainees is the son of Khatia Dekanoidze, a justice specialist who introduced Georgian experience with police reforms to Ukraine as head of the national police force in that country.

Dekanoidze left as Ukraine’s police chief in November last year and returned to Georgia, joining the National Movement which was headed by ex-President Mikheil Saakashvili. She has led active political activities and has often appeared in media commenting on hot political issues on behalf of UNM.

Her only son,Tornike Kopaleishvili (18), was detained in Tbilisi accused of being in possession of the party drug MDMI.

Dekanoidze said she thinks the arrest of her only son is related to her political activities.

The other controversial detention Tuesday targeted the son of Eliso Kiladze, editor of Kronika Plus, a UNM linked magazine strongly critical of the Georgian Dream government. Her son Davit Kharshiladze (28) was detained for possession of buprenorphin, a syntethic substitution drug which is illegal in Georgia.

Kiladze said she thinks the government is trying to silence her as a journalist.

The two young men were detained in Tbilisi on two different occasions on Tuesday.

Both pleaded not guilty in court the following day, yet both were placed in two months pre-trial detention.