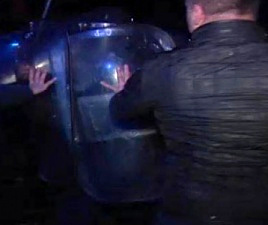 TBILISI, DFWatch–Police in Georgia arrested six more people on Thursday who are suspected of having been involved in a riot in the Black Sea city Batumi last weekend that started with a disagreement over a parking fine.

The six are expected to appear in court on Friday.

Unlike dozens of other detainees held on administrative powers, the six are subject to ordinary criminal charges, which may mean significantly tougher sentences.

About 80 men were detained on administrative offenses, and were issued fines and short-term incarceration.

They were held on special administrative powers that police in Georgia, like other former Soviet countries, may use to deal with immediate threats like riots, with less procedural safeguards.

The 80 have been charged with participating in mass unrest and assault on either law enforcers or public facilities.

According to Batumi-based newspaper Batumelebi 85 people have been detained altogether in connection with the riot, including some juveniles. Ten people were fined 250 Georgian lari (USD 100), seven were sentenced to five day long administrative incarceration, two were acquitted, while dozens are still awaiting trial.