Two defense officials accused of corruption given their jobs back

Two defense officials accused of corruption given their jobs back 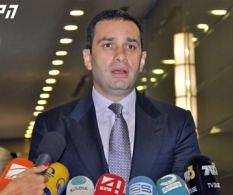 TBILISI, DFWatch–Two Defense Ministry employees who are awaiting trial for embezzlement of state money have been given their jobs back.

Giorgi Lobzanidze and Archil Alavidze were released in June along with three colleagues after spending about eight months in pre-trial detention.

All five were detained in late October, 2014. They are accused of embezzling four million lari in connection with the building of high-speed broadband, after a contract bid was won by the company Silknet. They deny the charges.

Irakli Alasania, who was defense minister at the time the five were detained, claimed that the whole case is politically motivated.

Wednesday, he congratulated the two on being reinstated and expressed hope that the others who are accused will also be brought back to work.

“I also congratulate the Ministry of Defense and the people,” he wrote on Facebook.

Alasania, who was dismissed and took his party the Free Democrats out of the ruling coalition, claims he was told not to sign a defense procurement deal in France, and that the charges against his former staff members was a reaction to him defying this order.

Several more ministry officials were later detained on other charges.

After the Free Democrats left the Georgian Dream coalition, it has become a vocal opposition party, frequently criticizing the government in parliament.

Though Alasania signed a document pertaining to the procurement deal in October, 2014, the final deal was signed by current Defense Minister Tina Khidasheli in mid June.

In connection with the latest development, she wrote on Facebook that it is not matter for the ministry to decide whether anyone is guilty, this should be decided by the courts.

Lobzanidze and Alavidze had not been fired, she explained, but suspended due to their detention. But since they were released from detention it was possible to bring them back to work at the ministry.

It is unknown why only two of the officials on trial were given their jobs back.