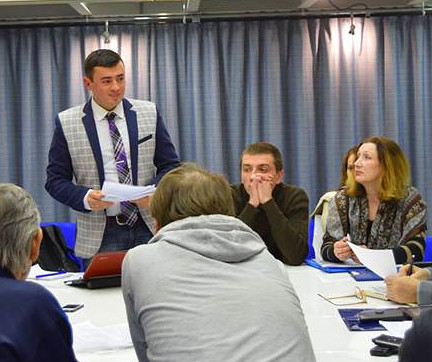 DF Watch spoke to Temur Kobalia, director of the NGO Georgian-Russian Forum, who was with the Americans as they were detained at a restaurant.

He said that Sharon Tennison, president and CEO of the Center for Civil Initiatives (CCI), and her colleague Theodore McIntyre, came to Volgograd to meet people and find out what possibilities there were for reviving projects that they carried out there a few years ago, or start new projects.

Kobalia wanted to introduce them to local human rights activists and in the following days they planned to attend a human rights summit in the same city.

When they were at the restaurant Federal Emigration Service, law enforcement officers showed up and read them a statement that said they had violated an administrative law.

The offense was that they had a tourist visa, but in fact were working.

The two appeared in court and pleaded guilty in order to avoid a drawn out trial. They were fined 2,000 Russian rubles each (USD 25), and were deported from Russia.

Temur explains that Russian legislation doesn’t allow visitors who arrive on a tourist to work, but he thinks Sharon and Theodore didn’t violate the law since they didn’t receive any salaries and didn’t carry out any official activities in Russia.

Kobalia says he hasn’t heard of any similar case in the past and that people were surprised.

“You know it wasn’t nice. Newspapers wrote about how agents of the US State Department had been arrested in Volgograd. It is like in North Korea. I mean why you have to say so? They are civilized people, came with visa, had documents in order. Hundreds of people arrive from Asia with no documents at all.”

He explained that Sharon and Theodore don’t want to talk to journalists right now. They are not planning to return to Russia in the near future.

A few months ago, DF Watch discussed with Kobalia the issue of foreign organizations and funds, as well as his own organization, which was listed as a one of the foreign agents. Organizations that are on the list, like Open Society, are still unable to resume work in Russia, Kobalia explained.