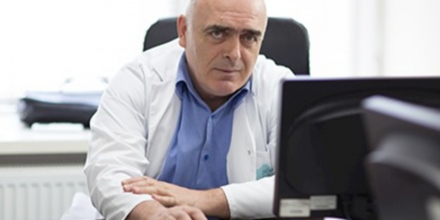 Tskhinvali regime on Friday sentenced a prominent Georgian medical doctor to twenty months in jail for “illegal crossing” of “state border” of the breakaway republic.

Vazha Gaprindashvili who is a well-known Georgian medical doctor and currently presides the Association of Orthopedists and Traumatologists of Georgia, was detained in mid-November in Akhalgori where he allegedly travelled to provide medical assistance to a woman accidentally fallen into a well.

The breakaway authorities charged Dr. Vazha Gaprindashvili with “illegal crossing of the state border”, which is punishable by a fine, forced labor for a term of up to two years or imprisonment for the same period.

Usually Tskhinvali regime limits punishment with a fine and swiftly releases dozens of people whom it detains monthly for the same “crime”.

However, the doctor has been treated exceptionally harsher because he during his first trial at Akhalgori court he behaved “defiantly” and didn’t plea guilty, Tskhinvali media reports. He insisted that SO as an independent state doesn’t exist thus he couldn’t violate the border. He also refused to recognize Tskhinvali de facto authorities as a legitimate entity.

Enraged secessionist authorities have blamed Dr. Vazha also for taking active part in 2008 August War that was vehemently denied by his colleagues in Tbilisi. Moreover, medical doctors say that Gaprindashvili was of those Georgian medics who treated wounded Russian pilots of downed warplanes.

Tskhinvali Committee of State Security (KGB) claims the doctor crossed the border with a “provocative purpose”.