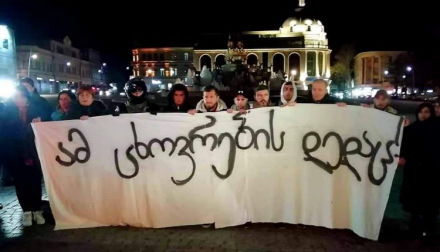 Rally of solidarity to Luka in Kutaisi. Protesters hold banned with slogan “F**k this Life”. (Ipress.ge)

The tragic death of 15-year old boy has sparked a mass outcry throughout Georgia. Dozens of protesters, mainly young people, went to the Ministry of Internal Affairs, the Government office and other state institutions to denounce police officers alleged brutality which had led the adolescent to commit suicide.

The teenager, Luka Siradze, jumped from the nine-storey building on December 11 after being interrogated at Digomi police where he reportedly underwent harsh treatment by law enforcers.

He eventually succumbed to his wound on Tuesday night.

Soon after the teenager’s demise, the police officer suspected in “psychological violence” was arrested by the State Inspector’s Service.

A female police officer, Mariana Choloyan, was charged with abusing power and arrested Tuesday night,  after Luka’s death. Upon her arrest, Ms. Choloyan reportedly fell ill and was placed to hospital for medical treatment.

“The juvenile was forced to confess the crime by means of psychological violence from the staff members of the investigative body who were investigating the crime, otherwise, they were threatening that his brother would face some problems and that he would have to spend a long time imprisoned in an institution where his liberty is deprived,” Georgian Young Lawyers’ Association (GYLA) says in its statement published on December 13.

“The psychological violence and intimidation from the police officers were so intense and real that the juvenile fell ill during the interview and requested medical attention, but this assistance was not provided,” GYLA says.

The police interrogated Luka Siradze on December 10. He was suspected of painting the walls of the school with “obscene” slogans.

Protesters on Tuesday night tried to paint the MIA building with one of these slogans, “F**k this Life”, that sparked a confrontation with the police.