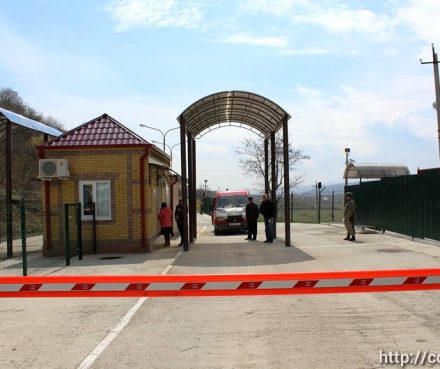 De facto authorities of South Ossetia shut down the single checkpoint connecting the breakaway republic with Georgia proper due to the recently introduced public holiday, “The Day of Courage and National Unity” on Thursday.

Any traffic through the checkpoint of Razdakhan near Akhalgori was diuscontinued till Friday evening, Sputnik-Ossetia reports. This is a singe passage through the conflict line, which connects Georgia proper with breakaway South Ossetia’s Akhalgori district, populated predominantly by ethnic Georgians. All other passages were closed after the war in August, 2008.

This measure, Tskhinvali Regime insists, was due to the security reasons related to the commemoration of newly introduced holiday, “The Day of Courage and National Unity”. On this day in 1989, the first skirmishes erupted between Georgian anti-communist opposition groups and ethnic Ossetian residents of then South Ossetian Autonomous Oblast, which was part of Georgian Soviet Socialist Republic. These events were a prelude of First South Ossetian war in 1991-92, which eventually led to the secession of the region.

The holiday has been introduced only recently by Tskhinvali regime and overlaps with a Day of St. George, Giorgoba, which is an important religious holiday for both Georgians and Ossetians, two predominantly Orthodox Christian ethnicities. Giorgoba is celebrated twice in every year in Georgia and some other Orthodox Christian countries – in November 23 and May 6. Both of these days are official holidays in Georgia. People from Akhalgori use holidays to travel to Georgia proper and vice versa, hence the decision by Tskhinvali authorities poses, at least, serious inconvenience for local residents.