Tsereteli’s giant Christ statue nearly finished, but where will it be placed?

Tsereteli’s giant Christ statue nearly finished, but where will it be placed? 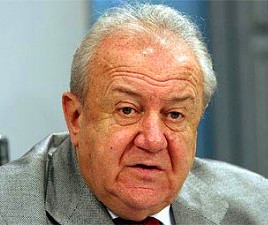 TBILISI, DFWatch–Zurab Tsereteli, a Georgian sculptor living and working in Russia, says he will soon finish a 33 meter tall statue of Christ, which he wants to erect in Mtskheta, the former capital of Georgia.

“I will finish working on the Christ statue very soon. The height will correspond to the age of Christ, 33 meters. I have received offers from several countries to erected the statue there, but I want to have it in Mtskheta, on Georgian soil. But no-one from Georgia has expressed such a wish so far,” Tsereteli said in an interview with the strongly conservative tabloid Asaval-Dasavali.

Tsereteli, who is based in Moscow and heads Russia’s Art Academy, has been working on making a replica of the Christ statue in Rio for many years. But it is still unknown where it will be placed, Russian media have reported.

The height of the statue will be enormous, as the statue itself will be 33 meters, plus a 47 meters base, which makes it 80 meters in total.

Zurab Tsereteli moved to Moscow in 1989. He designed the 98-meters-tall statue of Peter the Great in the center of Moscow. People often criticize his works for being too pompous and incompatible with the surroundings.

Tsereteli also made the Monument of Saint Nino at the entrance to Tbilisi and a 35-meters-height Saint George on the Liberty Square erected in 2006. He gifted it to the city after the Rose Revolution.