Transwoman killed and flat set on fire in Tbilisi

Transwoman killed and flat set on fire in Tbilisi 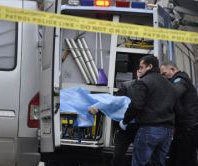 TBILISI, DFWatch–A young transgender person was killed in her apartment last night on Pekini street, Tbilisi. The victim’s apartment was set on fire, apparently in order to destroy the evidence.

Local media report that the victim was a 23 year old transwoman, who has appeared on several TV talk shows advocating sexual minority rights.

However, the Ministry of Internal Affairs (MIA) has not issued any official statement confirming or denying this so far.

“Around midnight, my neighbor called me. I came out of my apartment, and everything was on fire. But before that, there was no fight and no noise. I was told that the victim was killed and then burned. The door to the apartment were locked and could not be opened. It seems that someone with a key was in the apartment,” one of the victim’s neighbors told Interpressnews.

Not clear if it was a hate crime

The police have begun investigating it as a premeditated murder without aggravating circumstance. The Criminal Code of Georgia lists intolerance towards one’s sexual orientation or gender identity as aggravating factors for any committed crime, and such hate crimes are to be punished harder.

The organization Identoba, which works with LGBT rights, called on the MIA to make clear whether this was a hate crime or not.

The group stressed in a statement that the police are not qualified to solve homophobic crimes and investigate them as crimes without aggravating circumstances.

Identoba also asked to protect the privacy of the victim, and accused the media of not being interested in the horrific nature of the crime itself, but instead indulging in the victim’s orientation and gender identity.

“Each human life is precious regardless of their sexual orientation or gender identity.”

Sexual minorities not welcome in Tbilisi

In 2013, just after the May 17th events, CRRC Georgia conducted a survey asking Tbilisi residents their opinion regarding the clash between LGBT rights activists and people sharing anti-homosexual sentiments.

They talked to 542 Georgian-speaking adults, and the results showed that half of them would justify physical violence if it is directed toward people and groups who endanger national values.

Also, almost a third of the Tbilisi population don’t want to life nextdoor to someone belonging to a sexual minority.